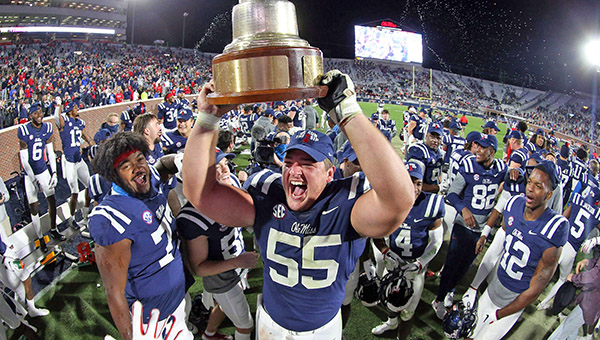 Former St. Aloysius football star Ben Brown was named the winner of the Richard J. Price Courage Compassion Award. The award is  presented annually to the senior Ole Miss lineman who, in the opinion of his coaches, has demonstrated extraordinary courage and unusual compassion in his dedication to his team and to Ole Miss.

Richard Price was a Vicksburg native and member of some of Ole Miss’ best teams from 1958-60. The award in his honor was established in 1998 and is presented annually at the football team’s spring game. Price was inducted into the Mississippi Sports Hall of Fame in 2019. He died in February 2021.

Brown is heading into his fourth season with Ole Miss and has started every game of his college career — 34 in all. He moved from guard to center before the 2020 season and helped the Rebels have one of the best offenses in the country.

Brown was picked to the All-Southeastern Conference Freshman team in 2018, and is on the Rimington Award watch list for this season. The Rimington Award is given to the top center in Division I college football.

The Price Award was one of seven that Ole Miss presented to players during the Grove Bowl spring game Saturday at Vaught-Hemingway Stadium. The other awards and winners were:

• Offensive lineman Caleb Warren won the the Eli Manning Award, which is given to the most improved offensive football player based on spring practice performance in the area of spirit, leadership, hustle, determination and dependability.

• Defensive lineman Tavius Robinson won the Jeff Hamm Memorial Award. It is presented to the most improved defensive football player based on spring practice performance in the areas of spirit, leadership, hustle, determination and dependability.

• The John Howard Vaught Award of Excellence went to wide receiver Elijah Moore. This award is given to a graduating senior athlete with the qualifications of dedication, scholastic ability, morale and performance.

• Offensive lineman Royce Newman won the Birmingham Alumni Club’s Leadership Award. This award is a portrait awarded in recognition of a graduating senior football player for his leadership qualities both on and off the field.

• Long snapper Jack Propst received the Clower-Walters Scholarship, which was stablished in 1974 by Jerry Clower to honor Carl Walters, a veteran Mississippi sportswriter. A plaque will be awarded to an outstanding graduating senior Ole Miss football player as selected by the coaching staff.

Not even another outstanding performance by Doug Nikhazy could keep Ole Miss from dropping another weekend series. Ole Miss’ ace... read more