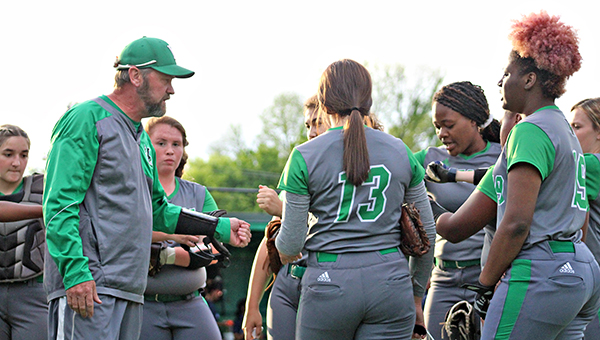 All season long, Vicksburg High’s softball team has rode the razor’s edge between being a very good team and a rather bad one.

When they limit errors, walks and other mistakes, the Missy Gators appear capable of a deep playoff run. When they don’t, they look like first-round cannon fodder.

“We can play with a lot of really good teams. We’ve shown that. And then we can go off into … somewhere else,” Vicksburg coach Brian Ellis said with a slight sarcastic smile.

Heading into this week’s playoff series against New Hope, the biggest challenge for the Missy Gators is figuring out how to get on — and stay on — the right side of that line. They have a favorable draw through the first couple of rounds of the MHSAA Class 5A bracket, some momentum after winning the Region 4-5A championship, and a real chance to make some postseason noise.

Game 1 of the best-of-three series is at New Hope on Monday. Games 2 and 3 will be played as a doubleheader Tuesday at Vicksburg’s Softball Swamp field.

“We just need to keep it together. Keep our defense tight. I think we’ll do good as long as we keep our heads up,” Missy Gators pitcher and infielder Lexi Kistler said. “I feel like we can go pretty far. I’m not sure what the other teams look like, but I think we have a decent chance.”

The Missy Gators’ hot-and-cold routine has been a season-long phenomenon. They’ve let leads of three runs or larger slip away in a half-dozen losses, and six opponents have scored more than 10 runs. They’ve also scored 10-plus runs themselves nine times and had some memorable rallies of their own.

In last week’s region championship-clinching victory over Ridgeland, Vicksburg trailed 9-0 in the fourth inning before storming back to win 11-10. A four-inning rally in the fourth inning of that game staved off a potential run-rule loss and sparked a massive comeback victory for the ages.

Senior infielder Jamie Ward said that comeback should give the Missy Gators a shot of confidence that no game is ever over.

“It lets us know we can also fight back. We can be down 10-0 and we know that we can come back,” Ward said.

The way they’ve been hitting lately, the Missy Gators also have the look of a dangerous team. They are averaging 12.8 runs per game over their last nine outings and have scored at least eight runs in every game but one.

They’ve also allowed eight runs or more five times in those eight games, which Ellis said makes their margin for error smaller. An 11-0 loss Class 6A power Germantown in the regular-season finale also did nothing to lift their spirits.

“We’ve got to stay on that right side for seven innings, and every pitch. I talk to them all the time about how you can’t take a pitch off, because that one pitch might haunt you really bad. You’ve got to take every pitch and pay attention, and keep attacking,” Ellis said. “That’s one reason I feel like we’re a little better hitting team than we’ve been in the past. We get this chip on our shoulder and don’t feel like any pitcher can throw it by us.”

The Missy Gators’ recent offensive prowess, as well as their ability to rally, have them believing they can win in this round and even beyond, Ellis said — and, with a team whose fortunes can vary so wildly, he added that confidence was perhaps their biggest weapon in the postseason.