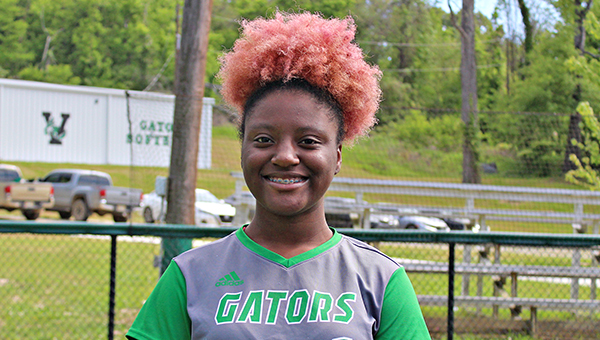 Vicksburg High softball player Kellisia Walker went 2-for-2 with an RBI double in an 11-1 loss to New Hope on Monday.

The good news for the Vicksburg Missy Gators is they’ll return home Tuesday with a chance to win their MHSAA Class 5A softball playoff series against New Hope.

The bad news is, they need to win twice to do it.

Annie Woolbright hit an inside-the-park home run, Emma Obryant went 3-for-3 with a double and three RBIs, and New Hope defeated Vicksburg 11-1 in Game 1 of their first-round playoff series on Monday.

Game 2 is Tuesday at 4 p.m. at Vicksburg High’s Softball Swamp field. Vicksburg (7-13) will need to win it and Game 3, which would follow immediately after, to advance to the second round. New Hope (12-8) only needs to win one of the two games.

Monday’s game was tied at 1 after two innings, and then New Hope got rolling at the plate while the Missy Gators went quiet. Woobright’s home run leading off the second inning broke the tie, and Obryant hit a two-run single later in the inning as the Lady Trojans scored three times to take a 4-1 lead.

They never trailed again, adding two runs in the fourth inning and four more in the third to finish the game via the mercy rule.

Adi Dueitt allowed one unearned run and five hits in five innings for New Hope. She did not walk a batter and struck out three.

Lili Kistler and Kellisia Walker both went 2-for-2 for the Missy Gators. Walker drove in their only run with a double in the second inning, which scored Kistler.

For 14 years, Reed Bourne has rarely had a free moment without a soccer ball on his foot. From youth... read more