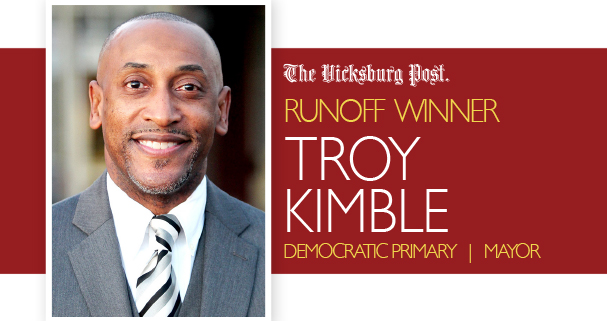 The victory was a strong showing for Kimble, who won all but one of the city’s 11 precincts and received nearly 200 votes more than he received in the April 6 primary.

He said he decided to run for mayor “simply because of my leadership ability to get our police department and public safety in the right way.

“In doing so, when we can get our city safe again I think we can actually build upon that safety and actually have our citizens to a point where we’re ready for urban building, ready for renewal and the programs we want to begin, but we have to get our city and our citizens safe,” he said.

“This isn’t anything against or to take anything away from Mayor Flaggs, he’s been in this business a long time,” Kimble said, adding he is looking at a new approach for city government “and thinking outside the box how we can do it.”

Jackson, the District 3 supervisor on the Warren County Board of Supervisors, said she will continue on the board “and making a difference from there.”

“That’s to be decided,” she said. “I’m interested in seeing how the general (election) is going to turn out. This is politics and we have to accept God’s will.”

She said she decided to run for mayor because she represented a city district and was disappointed in the level of support she received from city leadership.

CDC: Many Americans can now go outside without a mask

NEW YORK (AP) — The Centers for Disease Control and Prevention eased its guidelines Tuesday on the wearing of masks... read more