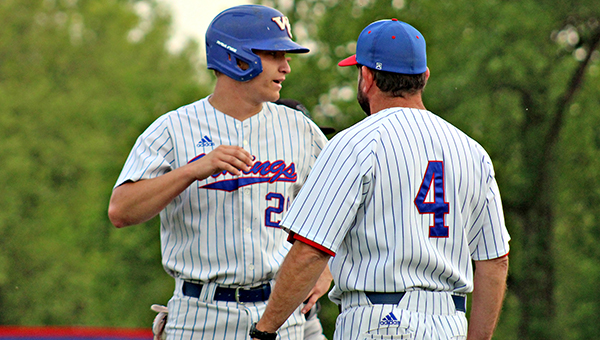 Warren Central’s baseball team has enjoyed a late-season surge heading into the MHSAA Class 6A playoffs.

It feasted on a soft part of the schedule to win five consecutive games, all by run rule, and even had plenty of highlights in a 19-9 loss to Northwest Rankin to close the regular season last Friday.

Success, though, has come with a price. The shortened run-rule games have cost the Vikings a chance to work out kinks and keep their pitchers ready. With a week between games, it’s a bit of a concern as they approach their first-round series against Tupelo (14-6-1).

“Don’t get me wrong, we’ll take them any way we can. It’s definitely not complaining,” Warren Central coach Randy Broome said. “I’m proud as I can be of them. But then there are some things we have to make sure we hit in practices that we’re missing. Make practices as gamelike as we can to make sure we cover that.”

Warren Central (9-17) will travel to Tupelo for Game 1 of the best-of-three series Thursday night, and again on Saturday if a Game 3 is needed. Game 2 is Friday at Viking Field. All three games are scheduled to begin at 6 p.m.

Warren Central has played some of its best baseball down the stretch. Although the five-game winning streak came against Murrah, Natchez and Vicksburg ­— none of whom have a winning record — the Vikings averaged 12.5 runs over their last six games.

Even in the five-inning, run-rule shortened loss to Northwest Rankin they jumped out to a 5-0 lead in the first inning and were competitive offensively. Floyd Davenport is batting .714 (10-for-14) and has scored 11 runs in his last five games, and Blake Channell is batting .500 (7-for-14) with six RBIs and seven runs scored in that same span.

After a 15-0 win over Vicksburg last Thursday, Broome said his hitters are taking good approaches at the plate after being hit-or-miss on that front for much of the season.

“The biggest thing I want them to see is our approach offensively. I think it was to a T tonight,” Broome said. “You watch successful teams at any level and they stay gap to gap most of the time. I don’t know how many we had up the middle, but it was finally seeing that maybe this does work. Wins like this hopefully open some eyes to what philosophy we’ve been teaching and preaching, and how things play out when you do the small things we’ve been talking about.”

The Vikings will need to be on point at the plate to beat Tupelo. The Golden Wave finished third in Region 1-6A, but it was behind state powers Lewisburg and DeSoto Central. Pitcher Hunter Elliott signed with Ole Miss in November, while teammates Mason Morris and McClain Ray are juniors who have committed to Ole Miss and Mississippi State, respectively.

The trio forms a rotation that is as formidable as any in the state, Broome said. Throw in at least one and possibly two four-hour road trips in a 72-hour span, and the Vikings have a lot of work ahead of them to survive and advance to the second round.

“They’ve got some good arms. Their No. 1 is an Ole Miss commit who throws 92 to 94 from the left side. It always seems like, for as long as I’ve been here, sooner or later a Tupelo is going to show up on the schedule,” Broome said. “Here we go with round one, a long trip and no easy way to get there.”