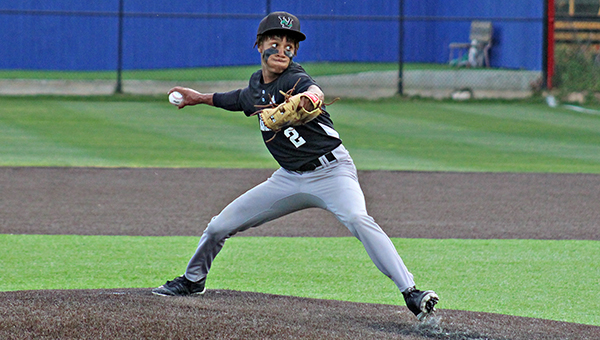 Vicksburg High pitcher Terrance Johnson throws to the plate last week against Warren Central. Johnson and the Gators will play Center Hill in the first round of the MHSAA Class 5A playoffs.(Ernest Bowker/The Vicksburg Post)

The last week of the baseball regular season was an opportunity for the Vicksburg Gators to prove not only their skill, but their character.

Playing against region rival Ridgeland, and crosstown foe Warren Central, the Gators had two chances to see how they handled the pressure of a big-game atmosphere and high expectations.

The Gators lost both games, by a combined score of 34-2, to head into the MHSAA Class 5A playoffs on a sour note and searching for some answers as the games get bigger and bigger from here.

“Our confidence has taken a nosedive a little bit,” Vicksburg coach Antonio Calvin said. “These guys are only throwing 83, 84 mph fastballs. Our pitching machine is throwing harder than that, and we’re hitting that in BP. But it’s when the lights turn on and the crowd is there, then all of this stuff is going through their head. Our younger guys, we expect them to be nervous and for them to get a little tight. For the older guys, absolutely not.”

There isn’t much time for the Gators (9-10) to figure things out. They face Center Hill (6-17) in a first-round series beginning Thursday at Bazinsky Field. Game 2 is Friday at Center Hill, and if Game 3 is needed it will be Saturday night back in Vicksburg.

Vicksburg earned the No. 2 seed from Region 4-5A, but it has also been an up-and-down season. Some big wins have been mixed in with puzzling losses. Calvin said the two defeats last week exposed one of their biggest weaknesses — an occasional tendency to miss routine plays and make simple mistakes that lead to big innings.

“This has been the story of our life all season long. It’s the routine stuff, the mundane stuff, the stuff that’s supposed to be programmed into you, that we’re hit or miss on,” Calvin said.

Fortunately, Center Hill appears to be in the same boat. The Mustangs finished third in Region 2-5A and scored a stunning upset of perennial Class 6A powerhouse DeSoto Central last week. They’ve also lost five of seven games entering the postseason, and had an eight-game losing streak in March.

On paper, it appears to be a golden opportunity for Vicksburg to snap a long losing streak of its own.

Vicksburg has lost 11 consecutive playoff games since 2014, and has not won a postseason series since reaching the Class 4A championship series in 2008.

“Right now, we’re looking like Clark Kent. Hopefully, once we get to Center Hill, you’ll see Superman come out,” Calvin said. “We’ve played some really good ball and lose by one or two runs. And then we get to this right here, and it’s the pressure of the atmosphere.”

Calvin added that, at this time of year, confidence is a key factor for the Gators. They’ve won enough to have the confidence they can do it again, but need to believe it to pick themselves off the mat after a difficult week.