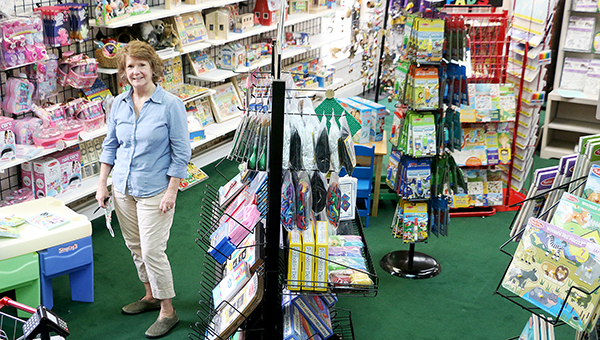 Peterson's owner Bobbie Marascalco credits the work of her employees and partnerships with her family for the store reaching its 20th anniversary. (Terri Cowart Frazier/The Vicksburg Post)

When Bobbie Marascalco set out to open a shop along Washington Street she had no prior experience in the retail business. But through the years, the Vicksburg native has learned what it takes to thrive and become successful.

Marascalso, who owns Peterson’s with her husband, Dr. Charles Marascalco, and sister, Logan Peay, had been a nurse 20 years prior to opening the business. It just so happened, she said, that she became involved in running the business.

“We owned the building and the people that were renting it moved out,” Marascalco said. So the question was asked, now what do we do?

“I had no clue of how to go about finding a tenant. This is a big building,” she said. “So since Charles and I had retired, and Logan didn’t have a fixed job at the time, we thought, ‘Let’s just open a shop.’”

Marascalo said at the time they had no business plan, knowledge or training in retail.

“It was just something we did,” she said.

Initially, when opening the store at 1400 Washington St., it was called Peterson’s Art and Antiques. Peterson was Marascalo and Peay’s maiden name.

Like the prior tenants, who operated an antique shop with vendors renting booth space, the trio decided to do something similar.

Marascalco said they flipped through state and regional magazines and found vendors interested in taking up shop in their building. Along the way, they also acquired artwork from local artists including Ann Biedenharn Jones and B.J. Crawford.

As it further grew, more local craftsmen became interested in the idea of renting space to showcase their wares and specialty foods. However, while vendors did rent space, Marascalco said, the shop was not set up in booths like the tenants before had done.

“That was not what I wanted. We might have people’s things in an area, but there was nothing saying I couldn’t put your thing over here or somebody else’s thing on top of your table,” she said.

Peterson’s Art and Antiques has continued to offer patrons a variety of specialty items, and also now carries the Melissa and Doug toy line.

Marascalco said she was introduced to the educational toys at a market she attended, and with the urging of an aggressive sales rep, decided to put some in her store.

“It was all because of that that we started into toys. I never planned anything. Things just happened,” Marascalco said.

The store’s toy line has grown and has even become what she called a “niche” for the shop, leading Marascalco to drop the “arts and antiques” from the name and just call the store “Peterson’s.”

“We had more toys and food than art and antiques,” Marascalco said.

Marascalco calls herself the “big boss,” since she is the one that is at the store. “I just tell them (her husband and sister) what I have done,” she said laughing.

Marascalco said she feels good about reaching this milestone with Peterson’s and credits her employees, some of whom have been there almost from the start.

“I could not do this without all the people that have worked here,” she said. “Everyone has been wonderful.”

The Board of Mayor and Aldermen have approved a contract not to exceed $99,688 with Stantec for engineering repairs to... read more