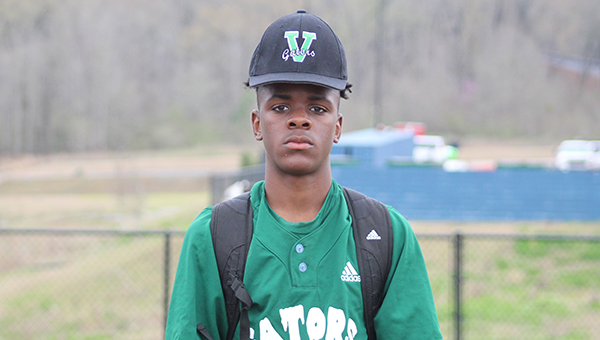 Vicksburg High pitcher Chris Green had six strikeouts in six innings in Game 1 of the Gators' Class 5A playoff series against Center Hill on Thursday.

Collin Clark struck out seven batters in a complete-game victory, and Center Hill scored all of its runs in the third inning to beat the Gators 3-2 in Game 1 Thursday at Bazinsky Field.

Game 2 of the best-of-three series is Friday night at Center Hill. Vicksburg (9-11) must win to force a deciding Game 3 Saturday back at Bazinsky Field.

Vicksburg pitcher Chris Green only allowed five hits and struck out six in six innings, but a couple of missteps in the third inning were enough to spoil his excellent outing.

Braxton Miller led off with a double for Center Hill (7-18), and Logan Esfeld followed with a single. Miller then scored on a wild pitch and Esfeld on a ground out to put the Mustangs ahead 2-0. An error, another wild pitch and a base hit by Joey Dunning brought in another run.

Vicksburg got on the board in the bottom of the fifth inning. Michael Johnson hit a one-out triple and scored on a two-out single by Derrick Brown. Brown then came around the bases with the help of two errors and a passed ball to cut it to 3-2.

The Gators only had one baserunner in the last two innings, however, and he was caught stealing in the seventh. Clark retired six of the last seven batters he faced to nail down the win for Center Hill.