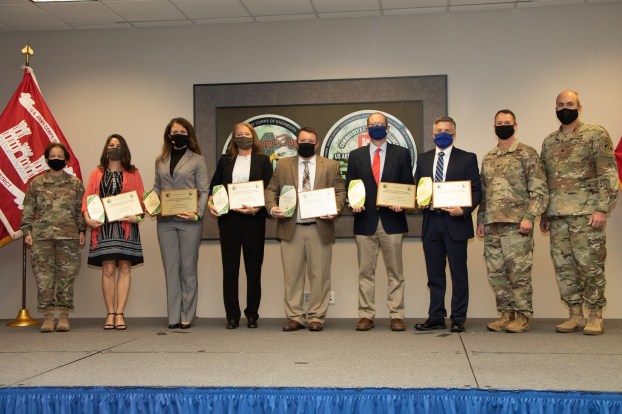 Regulatory Division team members from the U.S. Army Corp of Engineers (USACE) Vicksburg District were recently recognized by the U.S. Fish and Wildlife Service (USFWS) for their contributions to the MS SLOPES tool development.

USFWS presented the honorees with the Environmental Leadership Award, a distinction known as the Environmental Review and Permitting Champion. Their efforts were also recognized through the U.S. Department of the Interior’s Natural Resource Conservation Achievement Award.

First implemented in 2017, MS SLOPES, or the Mississippi Standard Operating Procedure for Endangered Species, is an interagency effort between USACE Vicksburg and Mobile districts and USFWS. The one-stop document allows USACE and USFWS to fulfill responsibilities under the Endangered Species Act, or ESA. Historically, standard procedure required the agencies to complete separate project-specific ESA evaluations and consultations for regulated activities.

The tool provides a step-by-step process to assess the potential effects of regulated activities on species and habitats protected under the Endangered Species Act using a programmatic framework. The implementation of MS SLOPES allows the Regulatory Division to complete evaluations and consultations with less deliberation time and provides a streamlined process for permit seekers across Mississippi.

“This effort couldn’t have been possible without our dedicated U.S. Fish and Wildlife Service partners and USACE Regulatory personnel. Together, we created a lasting framework that USACE and the Service, will utilize for years to come,” said USACE Vicksburg District Commander Col. Robert Hilliard.

“Consultations and evaluations are a major part of our mission to remain good environmental stewards and fulfill our responsibilities under the ESA. MS SLOPES is a major tool to help us achieve that effort, and we’re incredibly proud of the countless hours of work that made it a reality,” Regulatory Division Chief Jennifer Mallard said.

MS SLOPES includes 44 federally listed endangered and threatened species in Mississippi. The in-depth document provides biological information, suitable habitat information, and a dichotomous decision key for each species. While not unique to USACE or USFWS, the tool was the largest of its kind within USACE at the time of its deployment. In addition to USFWS MS-ESO, four USACE districts and three divisions utilize the framework.

The USACE Mobile District has completed a similar tool with partners in Alabama and northwest Florida.