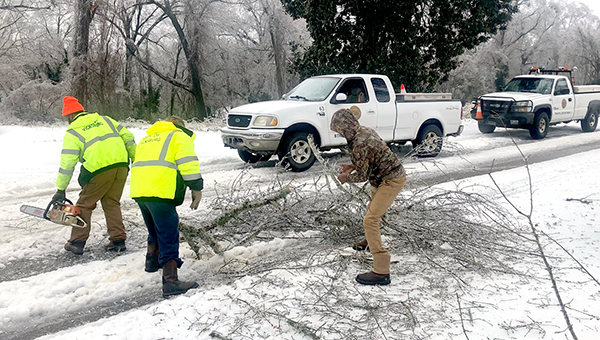 Vicksburg public works crews will be out Tuesday through Saturday removing limbs and branches left on city streets.

“Hopefully, if we can’t get it between now and this weekend we’ll be able to finish it up next week going into next weekend,” Mayfield said Monday. “We have debris that has been out there for several weeks and residents are rightfully getting upset about it.”

The move follows comments by Mayor George Flaggs Jr. about the city’s problems with trash cluttering the curbs of city streets at the start of Monday’s meeting of the Board of Mayor and Aldermen.

“I’m in favor of working on Saturdays; I don’t have a problem paying overtime,” he said.

The board in March approved a contract not to exceed $18,250 with Shackleford Management Services Inc. of Yazoo City to remove the ice storm debris in the city but more yard debris has appeared since Shackleford left.

Mayfield said two city crews — one in the North Ward and one in the South Ward — will begin collecting debris Tuesday.

“It’s better than it was but there’s still debris out there and it shouldn’t be there,” he said. “We still have a lot of it out there. We plan to make a real good stab at it starting tomorrow.”