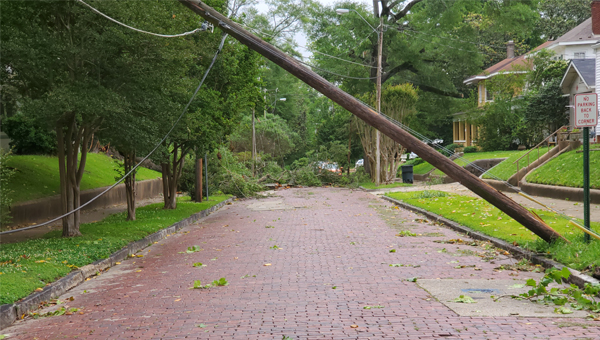 City, county and utility crews were continuing their recovery efforts in the wake of a squall line that passed through Warren County, hitting the area with up to 60-70 mph winds and rain.

The storm downed trees across the county, many taking utility lines and poles with them as they fell.

Entergy Customer Service Manager Shelia McKinnis said over 7,000 Entergy customers in the county were without power this morning. She said crews were still assessing damage and were unable to predict when power could be restored. She said customers would receive periodic updates.

“We’ve got eight houses damaged by trees and at least two destroyed; we‘ve got a lot of damage across the county,” Warren County Emergency Management Director John Elfer said. He said the hardest-hit areas were south of Interstate 20.

“Porters Chapel was beat up pretty good, Nailor Road, Estelle Drive and Jeff Davis Road; those were hit pretty hard.” He said an assessment team from the National Weather Service Office in Jackson was coming to look at the area.

Elfer said road closures were scattered across the county.

“Most of the roads are not completely shut off,” he said. “There’s just places like down around Estelle Drive off of Nailor Road and few places in Oak Ridge. We’re encouraging people to avoid those areas.”

Two roads were reported blocked in the city early Wednesday morning. A fallen tree blocked Locust Street between Clay and China streets, and a downed tree and utility pole blocked the entrance of Baum Street at its intersection with Cherry Street.

Elfer said people needed to be aware that utility and county road crews are working in the area and some downed electrical lines may still be charged.

“We’ve been able to get people and pets out of houses,” Pace said. “We have homes and mobile homes that have been crushed. At the height of the storm and just after the storm passed we had major thoroughfares blocked with trees down. At one point, we had 12 different trees down that had power lines in the trees.”

He said crews with Entergy, Yazoo Valley Power, which has customers in the northern part of Warren County, and Twin County Power, which serves Eagle Lake, “were out there with us after the storm. They were out there well into the night and back out early this morning.”

“We’re beginning to see some relief as far as the roads are concerned and the road crews have been able to clear trees but we still have large areas of the city and the county without power,” he said. “The biggest issue has been traffic; trying to work with county road crews to reroute traffic so people can have access to get to their homes.

“We appreciate the public’s patience and cooperation,” Pace said, adding, “Every deputy that I have has been on duty and we have a double shift out today just trying to serve the public.”