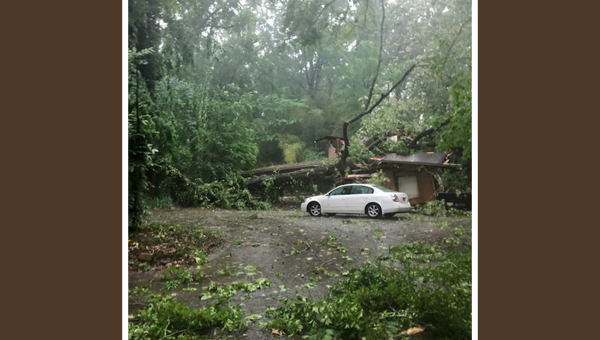 A Friends of the Vicksburg National Military Park and Campaign owned house was damaged in Tuesday's storm. The property was supposed to house park rangers at the end of the week. Submitted.

When the Friends of the Vicksburg National Military Park and Campaign announced in May the acquisition of property at the corner of Indiana Avenue and North Frontage Road, Friends Executive Director Bess Averett said a house on the property would be used as a residence for seasonal rangers working at the park.

Soon after acquiring the property, the Friends had the house’s floor replaced, brought in new appliances and cleaned and furnished it.

Tuesday afternoon, high winds from a squall line passing through Warren County toppled what was described as a “massive oak” on the house, demolishing it and forcing the Friends to scramble to help find four seasonal rangers a place to live during their six-month tenure at the park.

“The entire second floor is on the ground,” Averett said. “I’m just grateful no one was living there and no one was inside at the time. It could have been worse.

“These rangers are here for six months at a time and the house was hopeful because we have very few options for short-term rentals at an affordable price in Vicksburg.

“We felt like it was a service we could provide for the park to fix up this house and allow them to recruit better rangers because we had this housing option,” she said. “It’s very devastating.”

The problem the Friends have now, Averett said, “Is we have four seasonal park rangers who were planning on moving into the house this weekend and we had been there this week getting the house ready for them and obviously, they can’t stay there now.

“We’ve been trying to find what rentals are available in town and how we might get them set up somewhere,” she said. The rangers, she said, do not have a significant budget “so we’ll try to help them find affordable housing that’s short-term.”

The property acquired by the Friends backs up to the South Loop behind the Indiana monument and was occupied on May 22, 1863 by troops of the Union Army’s 13th Corps.

“We were able to write a grant to secure the land that we wanted to be preserved and we received a federal grant to receive half the value of the property,” Averett said.

“Then Mac Varner purchased the house and was holding it for us and he donated the portion of the money not available from the grant to the Friends group so the site could be developed and protected from commercial use and we could use the house for seasonal rangers,” she said.

But the damage from the tree has rendered the house unlivable, Averett said, and a decision on where to proceed with the property will have to be made by the Friends Board.

“The ultimate goal of the property when we wrote the grant was to clear the property of all structures and bring it back to its 1863 state,” she said.

“In the interim, because we had this usable house and there was a need for housing, it worked out well that we could provide that service to the park. The trees may have just expedited our land-clearing project.”