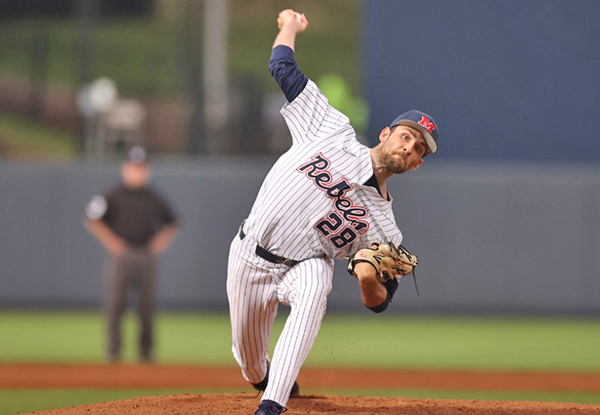 OXFORD — An easy night for Ole Miss turned into a lot of hard work.

The Rebels raced out to a nine-run lead in the fourth inning, then had to hold off a huge comeback by Arkansas State to win a 15-12 slugfest at Swayze Field.

Justin Bench went 4-for-4 with a double and two RBIs, and Peyton Chatagnier went 3-for-6 with four RBIs for Ole Miss (32-12). The Rebels had 18 hits, with only three of them going for extra bases.

Chatagnier hit a two-run single in the third inning, and in the fourth the Rebels sent 12 batters to the plate and scored seven runs to take an 11-2 lead. Ole Miss only had three hits in the fourth inning, instead using a pair of errors, three walks and a hit batter to keep things moving. Bench was hit by a pitch with the bases loaded and Kevin Graham walked with the bases loaded to bring in two of the runs.

Ole Miss seemed to be in control at that point, but Arkansas State (14-23) roared back in the sixth inning. The Red Wolves batted around and scored eight runs to get back in it. Ben Klutts hit a two-run home run and Jaylon Deshazier a solo shot, while Liam Hicks and Jake Gish both hit two-run doubles.

An RBI double by Parker Rowland finished the inning and chopped Ole Miss’ lead to 11-10. The Rebels, however, scored twice in the bottom of the sixth and twice more in the seventh to stabilize the situation.

Arkansas State added runs on a solo home run by Gish in the eighth and an RBI groundout by Tyler Duncan in the ninth, but left two runners on in the final inning.

Hicks finished 4-for-6 with three RBIs and four runs scored for Arkansas State, while Gish drove in three runs.

Josh Mallitz (4-1), the second of nine pitchers used by Ole Miss, earned the win. He worked the third inning and allowed one run. Derek Diamond pitched a scoreless ninth inning for his first save of the season.

Ole Miss will be back in action Friday at 6:30 p.m., when it opens a three-game Southeastern Conference series at Texas A&M. The final two games of the series, Saturday at 11 a.m. and Sunday at 1 p.m., will be televised on ESPNU.