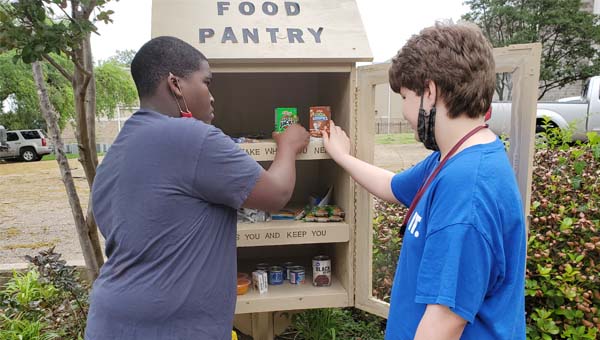 Two Vicksburg churches have taken their outreach an extra step to make sure people in Warren County don’t go hungry.

Mount Calvary Baptist Church and Crawford Street United Methodist Church have each established “Little Food Pantries” near their churches to provide anyone in need the opportunity to take what they need to sustain them for the day.

The idea for the mini pantries came from Karen Frederick, a member of Mount Calvary who read an article in March about a similar program sponsored by a church in Nebraska.

“They had this free food pantry,” she said. “It was outside and for people who had never been in that situation (unable to buy food) before. They were not on food stamps and always worked but because of the pandemic could not.”

Getting food from the little pantry, she said, “Would tie them over and they wouldn’t be embarrassed or shamed by standing in a food line.

“It was just enough that they could drive by, get what they needed to tie them over and I liked the idea,” she said.

Fredrick took a photo of the pantry to carpenter Larry Sweet, who built it, and the church members installed it on the parking lot side of the church.

“We stock it with non-perishables and I like to get things that people can open up and instantly have something to eat,” she said. She said the little pantry is stocked with items from Mount Calvary’s food pantry and from other sources.

Sometimes, Frederick said, people in the neighborhood who use it will restock the pantry.

And its popularity has made keeping the pantry filled a challenge.

“I cannot keep it filled,” Frederick said. “People go by weekly and I try to keep it filled once a month but I may have to go to two times a month.

“I’m glad that people are finding it necessary,” she said. “We’re helping each other.”

One benefit of the pantry, Frederick said, is that it is bringing the neighborhood together.

“Some of the kids vandalized it and threw spaghetti all over the parking lot and one of the ladies from next door was out there sweeping it up,” she said. “Some other neighbors came with brooms and brushes and we had a good time. We got to know each other. We just talked to each other. Sometimes, it’s a blessing.

“People want to help each other; we’re helping each other,” she said.

“I jumped on it,” Whitley said. She said the church’s helping ministry led by Paul Barnes got the dimensions of Mount Calvary’s pantry and with the help of some high school students built one for Crawford Street.

“We put it on the South Street side of our parking lot and the Micah’s Mission students have taken on the challenge of checking it every day and replacing the food,” Whitley said. “We would love to see more and more of these set up around town and maintained by different groups — churches or civic groups.”

Crawford Street’s pantry has been up for about three weeks, Whitley said, “But we feel like it’s been very successful. We can tell people are stopping by and picking up a can of tuna, a bottle of water.”

She said church members have been very good about making donations of food and money for the pantry.

“I feel like it’s a wonderful outreach ministry of our church and would be for any church that built one or participated in a program like this,” Whitley said.

The Warren County area was hit by an EF-1 tornado Tuesday when a squall line preceding a cold front passed... read more