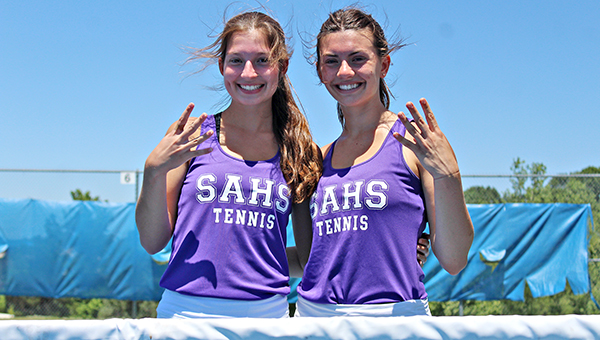 Eighty-nine matches later — the vast majority of them victories — there really was only one way to end the era.
Chewning and Jarratt rolled to their fourth consecutive Mid-South Association of Independent Schools title on Thursday by beating Bayou Academy’s Abby Marchetta and Katy Clark 6-2, 6-2 in the Class 4A No. 1 girls’ doubles championship match at Halls Ferry Park.

Chewning and Jarratt took up tennis together in 2010, with the Vicksburg Parks and Recreation Department’s summer program. They joined St. Al’s varsity team as seventh-graders and reached the Class AAA No. 2 girls’ doubles championship match in 2016. They had a 5-2 lead in the third set of that match, but wound up losing.

“That was such a learning experience. We never wanted to experience that again. That was a bad one,” Chewning said.

They rarely did. Chewning and Jarratt won 32 of their next 33 matches across a span of three seasons, and finished their high school careers on a 23-match winning streak. They did not lose a set in their last 20 matches.

“It’s hard to realize it,” Jarratt said of the duo’s long-lasting success.

Both winning streaks were extended with a pair of straight-set victories in Thursday’s Class 4A tournament. Chewning and Jarratt dispatched Pillow Academy’s Madison Jefcoat and Julia Love Lyon 6-1, 6-1 in the semifinals, and then two hours later were celebrating their championship victory over Marchetta and Clark.

“I wouldn’t want to do it any other way, but I’m a little teary-eyed just because it’s been such a long journey for us two,” Chewning said.

Jarratt added that, although, the second win was lopsided on the scoreboard, she and Chewning had to work hard for it.

“Those girls were good. The score doesn’t really reflect how long the games lasted. We started strong and then they kicked back up,” Jarratt said.

Chewning and Jarratt both said they had recruiting interest from several junior colleges and smaller four-year schools, but will opt to retire from competitive tennis as champions. They will both attend Mississippi State and have no plans to play organized tennis at the next level.

“We’re both going to go to Mississippi State. We might play intramural. I definitely won’t stop with tennis, but I wanted to focus not so much on tennis in college,” Chewning said.

Chewning and Jarratt were not the only St. Al doubles team to compete in the Class 4A tournament on Thursday. Logan Young and Ali Blackburn beat Lamar School’s Bayleigh Brent and Morgan Mitchell 6-2, 6-2 to advance to the No. 2 girls’ doubles championship match.

The run ended there, however, as Pillow’s Caroline Brock and Anne Craig Melton defeated the St. Al pair 6-4, 6-2.

“I think it was nerves a little bit for me, and the competition was definitely harder. Those girls were really good. The hardest competition we played all year,” said Blackburn, a sophomore. “I think we put up a good fight, though. This is our first time being at state, let alone the finals, so I’m really proud of how we played this season.”

Despite the loss, Blackburn said she was happy with the year she and the senior Young put together. Thursday’s loss was their first this season, and they won the Distrtict 3-4A and South State championships.

“This is an accomplishment for me,” Blackburn said. “We won South State and went undefeated all season. This is our first loss and it’s hard. But I’ll learn from it and come back, and I’ll want to make Logan proud.”

Other champions crowned during the Class 4A tournament included:

M-Braves return to the field after 612 days away