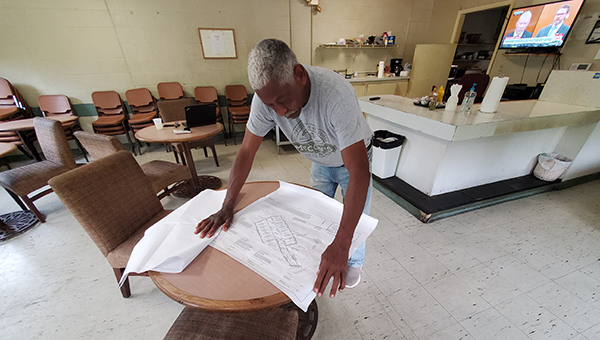 Clifton Jeffery stood inside his business on North Washington, rolled open a set of plans and described his plans for a proposed residential/commercial development on Kings Street.

Featuring 1,300-square-foot, three-bedroom, two-bath homes and a strip mall, the project will come together in stages, he said.

Jeffery pointed on the plans to the southern entrance of Kings Street on the map. “This is where this starts and we’ll go around. The first 10 lots, we’re going to do off the Kings Street side.” A small corner of the development will become a park for the residents.

“Right behind this building, we’re starting construction on a little strip plaza,” Jeffery said. “As of now, we’re going to have a beauty shop, a barbershop and a beauty supply store.”

Jeffery said the decision to build the development was inspired by the neighborhood.

“I was born in Redwood, but since 1953, we’ve been affiliated with this neighborhood. My wife is a lifelong resident of Kings. We were trying to find something to invest the community and housing is the main things I was looking at.”

Initially, Jeffery said, he planned to build only homes, “but the mayor (George Flaggs Jr.) talked me into building the strip mall to provide services to the community. There’s no beauty shop, no barbershop; nothing here. So we thought we’d do something like that.”

He said everything for the project has approved except the final survey, which needs to be filed with the city.