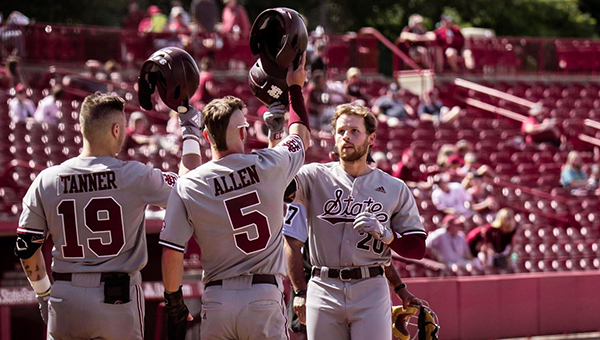 Luke Hancock, Logan Tanner and Rowdey Jordan all homered, and the Bulldogs scored all of their runs in the first five innings as they beat South Carolina 9-6 on Saturday.

Mississippi State (35-10, 16-7 Southeastern Conference) has taken the first two games of the three-game set to earn its sixth series victory in eight SEC weekends. They’ve won 10 of 12 weekend series overall, and can collect their fifth sweep by beating the Gamecocks (27-17, 11-12) in Sunday’s finale at 1 p.m. That game will be televised on SEC Network.

“What we’ve done the first two days should give us some confidence but it’s really about us getting the next game and having more wins than everybody else in our league,” Mississippi State coach Chris Lemonis said. “All we can control now is what we do tomorrow. Coming out and having a great game tomorrow puts us in a really good position.”

Jordan led off the game with a single for the Bulldogs, and Tanner Allen brought him home with a triple three pitches later. Two batters after that, Hancock hit a two-run home run to right field and the Bulldogs were off and running.

Tanner hit a solo home run in the third inning, Jordan hit one in the fourth, and a two-run single by Allen in the fifth put Mississippi State ahead 9-1.

Tanner finished the game 3-for-5, Allen was 3-for-5 with three RBIs, and Jordan had two hits and scored three runs.

Will Bednar (5-1) earned the win for Mississippi State with 13 strikeouts in six innings. Landon Sims finished the game with two scoreless inning for his sixth save.

Ole Miss used a strong pitching performance by Doug Nikhazy, three big rallies in the middle innings, and a three-run home run by a returning Tim Elko to beat Texas A&M and give Bianco his 900th career victory. It was Bianco’s 800th win as Ole Miss’ skipper.

The Rebels scored twice in the fifth inning to tie the game at 2, then took the lead for good with three runs in the sixth. One more big rally in the seventh, capped by Elko’s three-run pinch0hit homer, put them ahead 12-2.

LSU won two out of three games in the series.

Richard Fitts allowed one run and struck out seven in six strong innings on the mound for Auburn, while Carson Skipper finished with 2 1/3 innings of scoreless relief to earn the win.

LSU starter Ma’Khail Hilliard allowed one run and struck out six in 7 1/3 innings.