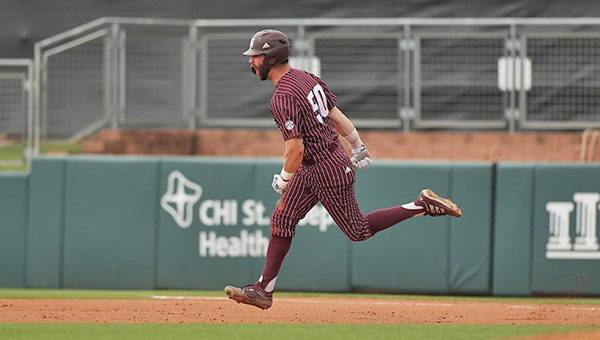 Texas A&M's Will Frizzell (50) rounds the bases after hitting a go-ahead grand slam Sunday against Ole Miss. It was Frizzell's fifth home run in the three-game series and gave the Aggies a 6-5 victory over Ole Miss. (Texas A&M Athletics)

Frizzell hit a two-run home run in the first inning, and then a go-ahead grand slam in the seventh to lead Texas A&M to a 6-5 victory over the Rebels in Sunday’s series finale.

Frizzell hit five home runs in the three-game series, including a walk-off solo shot in the opener on Friday. He went 7-for-12, with 11 RBIs and seven runs scored in the series.

“I feel like I’ve been on the barrel all year and had a bunch of balls get close to going out but not go out. This weekend, those balls all went out for the most part,” said Frizzell, a senior first baseman who now has 18 home runs this season.

Ole Miss has lost five of its last six conference series. It had won three straight series against Texas A&M before losing this one.

Hayden Leatherwood went 3-for-3 with a pair of RBI singles to help Ole Miss take a 5-2 lead in the finale, but the bullpen was unable to hold it.

“Ole Miss has beaten up on us the whole time I’ve been here, it feels like,” Frizzell said. “It’s always been close games with them. They walked us off twice my sophomore year. We were just throwing punches back and forth, and we threw the last punch in the last game.”

Jeff Heinrich hit a one-out single for South Carolina in the 11th, and then came all the way around on Mendham’s double off the wall in left-center field. The Gamecocks also scored a run in the bottom of the ninth to tie it at 3, on a double by Heinrich, and snapped a six-game SEC losing streak.

Mendham and Heinrich finished with two hits apiece. Mendham also homered in the second inning and had three RBIs total.

Rowdey Jordan and Tanner Allen both hit solo home runs for Mississippi State. Jordan’s homer in the sixth inning put the Bulldogs ahead 3-2.

The Bulldogs had a five-game SEC winning streak come to an end, but still took the first two games from the Gamecocks to win their sixth conference series in eight tries.

Mississippi State will host Tennessee-Martin Tuesday at 6:30 p.m., and then begin a three-game SEC series against Missouri Thursday at 7:30 p.m. Thursday’s game will be televised on ESPNU.

Nikelle Galatas pitched a seven-inning complete game and totaled 12 strikeouts for the Tigers.

Valley’s only run came on a solo home run by Ty Washington in the seventh inning. The game ended via the mercy rule after Reyes’s three-run homer in the bottom of the seventh.

Jackson State (31-8, 24-0) finished with an undefeated record in the SWAC for the first time since at least 1980. The previous best conference record for JSU was a 22-1 mark in 1990. The Tigers will be the top seed for the SWAC Tournament that begins May 19 in Madison, Ala.

“Really proud of this group,” JSU coach Omar Johnson said. “We’ve all gone through a lot this past year with the COVID-19 pandemic, and we’ve adjusted and made the necessary changes. The regular season is only part of the season and everyone is 0-0 when SWAC tournament play begins.”

Sports column: The sight, sound of crowds is wonderful to see again

When the COVID-19 pandemic began in March 2020, the speed at which society changed was stunning. In a matter of... read more