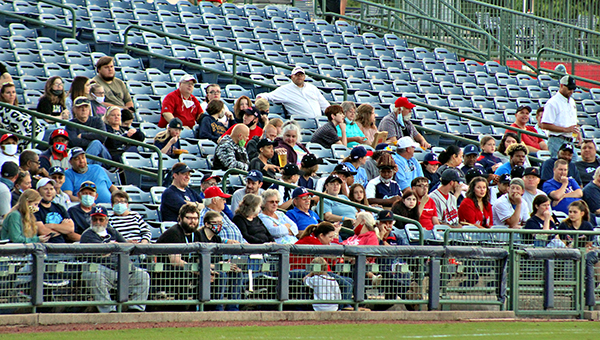 Sports column: The sight, sound of crowds is wonderful to see again

When the COVID-19 pandemic began in March 2020, the speed at which society changed was stunning.

In a matter of days, a couple of weeks at most, we went from being social creatures to hermits. Attending any event with crowds — at least outside of the daily toilet paper and bleach hunt at Kroger — felt like playing Russian Roulette.

The strangest part was how quickly it became normal. We masked up, we isolated, we distanced like we were told to do. It became part of the daily routine, to the point that it’s now a social custom to wear a mask into any store. It feels awkward when we don’t, even if we’ve had the vaccine and it doesn’t make a ton of logical sense.

Another odd thing was how quickly we adjusted to sports with no or limited crowds. Cardboard fans and piped-in noise replaced actual screaming fans. We used to look at an NFL or college football game with empty stands and think the team was doing poorly. By the end of the 2020 season it was the normal scene whether a team was 2-14 or rolling toward the Super Bowl.

Things have quietly taken another strange turn over the past month or so, at least here in Mississippi. Fans suddenly reappeared.

Gov. Tate Reeves eased capacity restrictions on sporting events at the beginning of April and fans immediately flocked back to stadiums. Ole Miss had more than 10,000 people for each game in a weekend series against Arkansas. The next weekend in Starkville, Mississippi State and Ole Miss drew nearly 40,000 fans for their three-game SEC series.

Locally, it didn’t dawn on me until I looked in the stands during the National Anthem before the Vicksburg-Warren Central baseball game a couple of weeks ago. It was not quite a capacity crowd, but the seats behind home plate were pretty full and fans lined the fence between the dugouts and down the third base line.

A few days later, when St. Aloysius hosted Brookhaven Academy for a baseball playoff game at Bazinsky Field, the bleachers behind home plate were full and dozens of fans surrounded the perimeter.

The Vicksburg vs. New Hope softball game that was replayed sold 250 advance tickets — and could have sold many more if they’d been available — in 24 hours.

At last weekend’s MAIS track meet at Jackson Prep, not only was the parking lot full but cars were parked a half-mile up and down Lakeland Drive. I’ve been covering that event for years and can’t remember it ever being that crowded. Hearing the dull buzz in between events and the occasional roar during an exciting race was music to the ears.

It struck me at that point how far we’ve looped around in the past year. We went from roaring crowds, to no games at all, to games without fans, to games with some fans, and now back to having regular crowds again. It is as strange to see crowds now as it was not to see them last summer.

The years of 2020 and 2021 will long be remembered as the COVID years. A long, strange dream in which society was turned on its head as we wrestled with fear, uncertainty, science and recovery. Thankfully, it looks like we’re finally waking up from it.