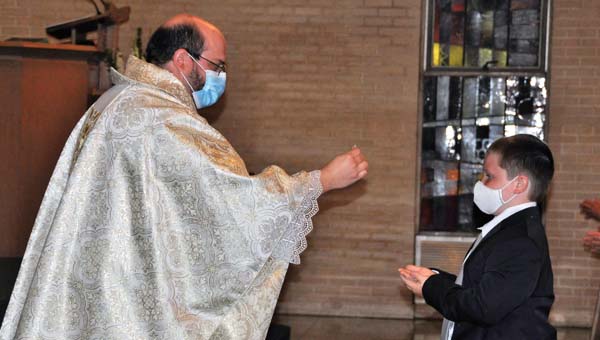 The Rev. Rusty Vincent, left, pastor at St. Paul Catholic Church gives Holy Communion to a boy during Mass. The Catholic and Episcopal Dioceses have relaxed some regulations involving Mass and services and other church activities. Picture by Connie Hosemann.

As the number of cases of COVID-19 decline in Mississippi and other areas, the leaders of Mississippi’s Catholic and Episcopal congregations are beginning to loosen restrictions on services that were put in place at the start of the pandemic in 2020 more than a year ago.

Some of the requirements, however, such as the continued wearing of masks and social distancing, remain with the new protocols as people begin adjusting to life beyond COVID-19.

An April 30 directive from the Catholic Diocese of Jackson announced several changes in the diocese’s COVID-19 policies initially released in March 2020. The new guidelines reduce social distancing during mass from 6 feet to 3 feet and allow the return of hymnals and missalettes to the church pews.

Also, church pews do not have to be sanitized as often as previously required under the directive. How often the pews need to be sanitized is left up to the local parish community.

One major change is the diocese’s decision to let pastors and parish councils decide what events can be held at parish facilities, providing guidelines for church-sponsored events and children’s summer events.

The Rev. Rusty Vincent, pastor of St. Paul Catholic Church, said updates on changes for the parish under the new guidelines have been posted on the parish’s website.

“There’s some things I’ve opted not to do yet but there are things we’re going to do so I’m trying to get the word out,” he said.

He said the ropes used in the church to mark off pews for social distancing have been removed and the missalettes have been returned to the pews.

“We are going to have some parish gatherings starting during summer,” Vincent said. “There’s a lot of little things we’re going to be doing but beyond that not a lot that has changed.”

One thing that was not mentioned in the diocese’s directive was whether the dispensation from Mass issued by Bishop Joseph Kopacz has been lifted.

“I’ve had a few people ask about that,” he said. “I don’t get the sense that’s going to change in the next month or so.”

An announcement issued Wednesday by the Right Rev. Brian Seage, bishop of the Episcopal Diocese of Mississippi, said Episcopal churches in the state can resume indoor congregational singing at services beginning Pentecost Sunday.

Congregants, however, must remain masked and the total singing opportunities should not exceed 20 minutes, according to the announcement.

The announcement follows a set of guidelines released April 21 by Seage that allowed churches to increase attendance at services to 75 percent capacity with social distancing and masks and encourages congregations to meet outdoors for worship services and fellowship events. The Episcopal Book of Common Prayer can be returned to the pews under the guidelines.

In-person fellowship may be offered while maintaining social distancing and in-person meetings may be held. A virtual connection must be offered for anyone who does not wish to attend the meeting.

“We will look forward to singing again,” said the Rev. Sam Godfrey, rector of Christ Episcopal Church. “We’ve had the hymnals out so folks could follow along but it will be nice to know we can sing again.”

Godfrey said the other guidelines mentioned by the Seage will not change much at the services.

“As far as raising the (capacity for services) to 75 percent, we’ve got so much space that won’t make that much difference,” he said. “What we’re all looking forward to is being able to take off the masks.”

Elisabeth Malphurs, priest in charge at St. Alban’s Episcopal Church, said the present attendance for services is at 50 percent.

“Our vestry is just moving a little cautious on that (increasing capacity) but we probably will (go to 75 percent) and before Pentecost we will probably go back to singing as the bishop has allowed us to do. We’ve missed that very much.”

She has also been trying to hold more fellowship activities outdoors.

“That has been safer all along and we’re going to try and do a little bit more dabbling outside,” she said.

The Rev. Andy Andrews, Rector of Church of the Holy Trinity, said he is glad to have singing return to the church.

“I’m grateful for the more possibilities and looking for even more to roll out in the future but our church has been really vibrant, more and more people are gathering, it feels so good,” he said.

He said the church has been having outside events and is still wearing masks.

“The energy since our last (outdoor) experience is just palpable; it’s like the Holy Spirit has taken over,” Andrews said. “I’m noticing more people off the boats touring the church and more small groups are coming to meet at the church and on Sundays, it’s just robust; beautiful.”