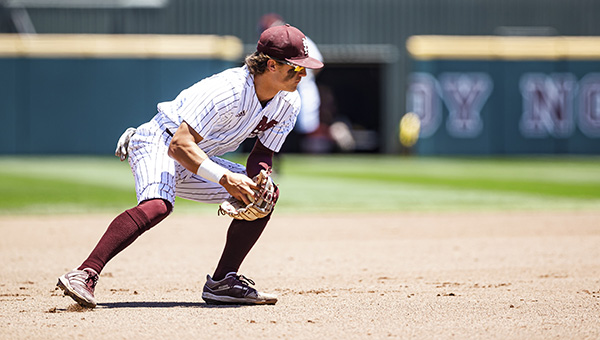 Walker Powell tossed a complete-game five-hitter in the opener. and Reed Trimble homered twice and drove in a career-high seven runs in game two as No. 17 Southern Miss swept Florida Atlantic 6-1 and 14-8.

Southern Miss (35-16, 22-8 C-USA) plays its final scheduled regular-season game Sunday at 11 a.m. against the Owls (28-23, 17-14) and needs a win or a Louisiana Tech loss to capture the West Division crown. Southern Miss is also in the running for one of 16 regional host slots in the NCAA Tournament, and a win and division title would certainly bolster its case.

In the opening game, Powell retired the first eight batters he faced to extend his streak to 26 straight batters. The streak ended with a two-out double to Jalen DeBose, who then scored on a single by Wilfredo Alvarez.

That was the only blemish on Powell’s day. He gave up just the one run, with no walks and seven strikeouts, to earn the victory and improve to 9-2 on the year. Powell tied Darrell Lindsey (1985-88) for second place on USM’s career wins list with 29. The senior also ranks No. 1 in Division I baseball for career wins for an active pitcher.

In game two, Trimble went 4-for-4 with two home runs and seven RBIs, and McGillis and Christopher Sargent also went deep as the Golden Eagles won 14-8 to finish the sweep. Sargent, McGillis and Blake Johnson each drove in two runs.

Vandy pitcher Jack Leiter went six innings and had 13 strikeouts, while allowing only one run. Chris McElvain pitched the last three innings for his second save of the season. McElvain had four strikeouts.

The Rebels and Commodores have split the first two games of the three-game series at Swayze Field. The finale is Sunday at 2 p.m., and it will be televised on the SEC Network.

Missouri (14-33, 7-20 SEC), the last-place team in the SEC East Division, hit four home runs and smashed 15 hits to beat the Bulldogs and claim its first series victory since April 1-3 against Texas A&M. The Tigers had lost nine consecutive SEC games entering the weekend, but left Starkville with a two-game winning streak.

Brandt Belk hit a grand slam in the third inning to give Missouri an 8-0 lead, and Mississippi State never could catch up. The Bulldogs got as close as 10-8 on a two-run double by Tanner Leggett in the fifth inning, but Missouri answered with two runs in the seventh inning. A three-run home run by Luke Mann in the ninth put it away.

“Our guys always bring energy, but when you’re chasing from behind the whole time it’s hard to have a ton of energy,” Mississippi State coach Chris Lemonis said. “Last weekend we were at South Carolina, and we had the lead, we played with it, we played with a lot of energy. We played as the aggressor, and this weekend we just didn’t. It is what it is. We chased the whole weekend, and it gets tough to chase. Especially when there’s so much on the line. You’d like to get out there and get your feet wet and we gave up runs in the first and second inning to put us in that chase all weekend long.”

Mann entered the game as a pinch-hitter in the fourth inning and finished 2-for-3 with four RBIs for the Tigers. Alex Peterson hit two solo home runs, and Joshua Day was 2-for-4 with two RBIs and two runs scored.