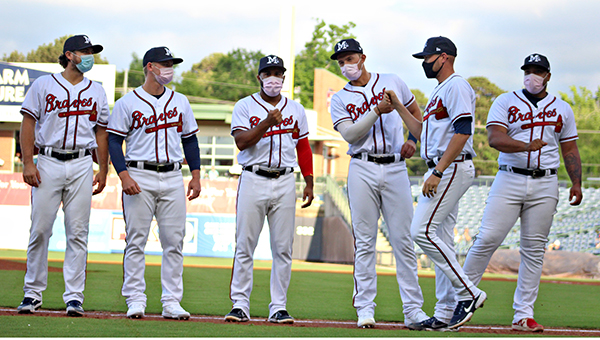 Mississippi Braves players greet each other on the first base line at Trustmark Park before the season opener against Pensacola on May 5. The M-Braves will have a 12-game homestand against Chattanooga and Montgomery May 18-30 at Trustmark Park. (Ernest Bowker/The Vicksburg Post)

PEARL — Mississippi Braves fans can breathe a little bit easier and get closer to the action at games at Trustmark Park under new COVID-19 guidelines issued Tuesday.

Major League Baseball announced it has lifted the requirement for fans to wear face coverings at all minor league ballparks, and is instead deferring to local and state guidelines. Mississippi does not have a current mask mandate, which means M-Braves fans will no longer have to wear masks at games.

At the same time, the M-Braves announced that seats in the “buffer zone” — an area that including two rows of seats around the field and the first two rows of each dugout — would be open effective immediately.

Major League Baseball had created the buffer zone as part of its health and safety protocols. A clear bag policy remains in effect.

The new rules went into effect just as the M-Braves began a 12-game homestand Tuesday night against Chattanooga. The M-Braves and Lookouts will play a six-game series that continues through Sunday. Weeknight games are at 6:35 p.m., Saturday games at 6:05, and this Sunday’s game begins at 2 p.m.

The M-Braves will also host a six-game series against the Montgomery Biscuits May 25-30.

The M-Braves have a 4-8 record and are in last place in the Double-A South Division after two series.

OXFORD — Ole Miss has not had a lot of great baseball weekends the past couple of months, but they... read more