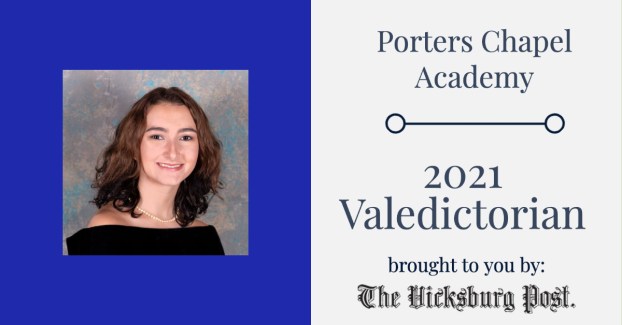 After finishing up sixth grade, Brianna Poole set a goal.

She aimed her sights on becoming the valedictorian for Porters Chapel Academy’s class of 2021, and in addition to being named the school’s STAR student, Poole succeeded in accomplishing the goal she set for herself six years earlier.

“Unlike with STAR student, I had set out to be valedictorian for my class from the start of seventh grade, because I had been valedictorian of my sixth-grade class and wanted to keep that tradition going,” Poole said.

Poole is the daughter of Nick and Jamie Poole.

Poole credited her academic successes to the support from family, friends and teachers.

In following with tradition, Poole is set to give her valedictorian speech during commencement exercises which will be held at First Baptist Church on Saturday at 3 p.m.

Poole’s 18 classmates, along with the friends and families of the graduates who will be attending the ceremony, will have the opportunity to hear a speech, Poole said, that will reflect on a year met with challenges and rewards.

“The focus of my speech will be how this past year has taught me how to be grateful for those around me,” she said.

At Porters Chapel Academy, Poole was a member of the Key Club, Student Council, National Honor Society and the cross country team. She also studied dance at the Teresa George School of Dance for nine years.

A Redwood man was arrested Wednesday and charged with aggravated assault. Undrier Cage, 43, is accused of firing a handgun... read more