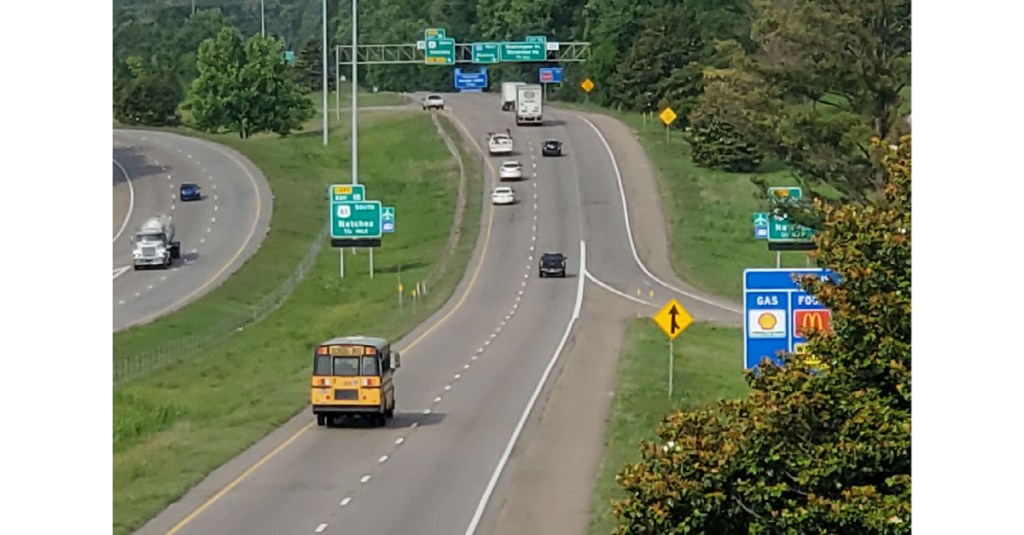 The changes in the westbound Halls Ferry and U.S. 61 interchanges could be among improvements under an infrastructure program proposed by city and county officials. (John Surrat)

When president Joe Biden announced his American Jobs Plan in March, he indicated the first part of the estimated $2 trillion plan was a program to repair and upgrade America’s aging infrastructure system.

And with $621 billion of the proposed American Jobs Plan allocated for transportation, local officials have been meeting with Gov. Tate Reeves and Lt. Gov. Delbert Hosemann to ensure a chunk of the potential funding that comes to Mississippi will help Vicksburg.

Pablo Diaz, president and CEO of the Vicksburg Warren Economic Development Partnership, said he, Mayor George Flaggs Jr. and Dr. Jeff Holland, president of the Warren County Board of Supervisors, met recently with state officials to discuss six proposed projects for the city and county.

“These are infrastructure needs that we have discussed with the governor’s office,” Diaz said. “We highlighted these key projects to our region, and we do this often, but especially now in the face of a potential infrastructure bill at the federal level. We are making sure our elected officials and representatives and leaders understand what are our top priorities for this region.”

• The Vicksburg Port Expansion/U.S. 61 South, $100 million. Flaggs has said in the past the port has the potential to create 500 new jobs.

• Expanding Interstate 20 through Vicksburg to six lanes, no cost available. A spokesman for the Mississippi Department of Transportation said the improvements for I-20 are being designed.

• Building a connector road linking U.S. 61 South to Halls Ferry Road, $28 million. The road is seen as a remedy to heavy traffic on Halls Ferry Road at the U.S. Army Engineer Research and Development Center. Flaggs also suggested it as a possible alternate route for ERDC and a potential access road to Sports Force Parks on the Mississippi.

The plan was later dropped in the face of opposition from residents living near the road’s potential route.

“We’ve proposed (the projects) to the governor and the lieutenant governor and now we’re in the process of proposing them to the congressmen and the senators,” Flaggs said. “I just think that it’s so important that if we’re going to have an infrastructure bill at the national level and the state level, we should have our needs on the table.”

He said a Zoom meeting is being planned with the state’s congressional delegation.

Flaggs said the proposal for the I-20 interchanges involves a total redesign to make them safer, and also called out the Clay Street entrance to I-20 eastbound as one of the major problems.

“The I-20 entrance at Clay Street is the most dangerous one I’ve ever seen in my whole life,” Flaggs said.

The six-lane expansion of I-20, he said, is favored by Hosemann, while widening Mississippi 27 is a plan proposed by Central District Transportation Commissioner Willie Simmons.

“All of our interchanges in I-20 need work,” Diaz said. “They’re not up to standard; they can be dangerous for the community and we’re concerned about safety, specifically at Ceres.”

While Ceres has become successful with new companies locating in the park, that success has also increased the risks of entering and leaving the park.

“It would be good to redesign and build those interchanges so they can have adequate acceleration and deceleration lanes, because we don’t have that right now. It can be dangerous,” Diaz said.

One proposed project not included on the list is a road connecting U.S. 61 North with the Port of Vicksburg to remove truck traffic off Washington Street. Flaggs said that project has not been scrapped, but is not a priority with the Board of Supervisors,  Mayor and Aldermen’s recent decision to extend Levee Street to WaterView Casino.

“Levee Street will cut that (truck) traffic,” he said.

Both Flaggs and Diaz say the port project should be the priority. The port, Flaggs said, is a priority for Vicksburg.