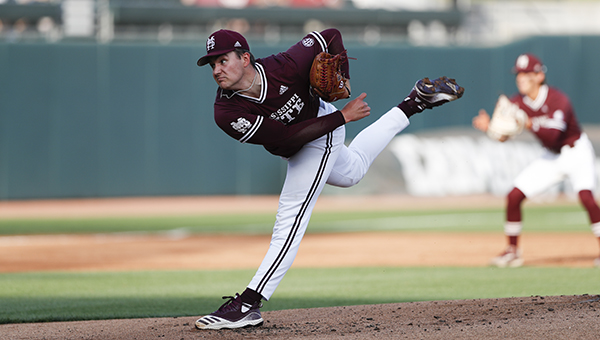 Mississippi State pitcher Will Bednar delivers against Alabama on Friday. Bednar had 11 strikeouts in a career-high eight innings to lead the Bulldogs to a 7-0 victory. (Jeff Hanson/UA Athletics)

TUSCALOOSA, Ala. — Mississippi State locked up a valuable bye in the Southeastern Conference Tournament by sewing up another series victory.

Will Bednar pitched a career-high eight scoreless innings, while Tanner Allen and Luke Hancock drove in two runs apiece to lead No. 3 Mississippi State to a 7-0 win over Alabama on Friday.

Mississippi State (39-13, 19-10 SEC) won its seventh conference series in 10 weekends. With one game left in the regular season, it is one game ahead of fifth-place Ole Miss and holds the head-to-head tiebreaker with the Rebels for one of the top four seeds in next week’s SEC Tournament.

The top four teams earn a bye into the main draw of the tournament, which gives them an extra day off and allows them to skip Tuesday’s single-elimination round.

The Bulldogs will try to complete the sweep of Alabama (29-20, 12-16) on Saturday afternoon. Alabama has already clinched its first SEC Tournament berth since 2016.

“Starting pitching dictates so much and we have gotten two great starts from our guys on the road. It lets our bullpen rest and be ready for Sunday,” Mississippi State coach Chris Lemonis said. “We have a handful of fresh arms to go tomorrow. They are going to come out fighting for a lot and it will be a very competitive game tomorrow.”

Bednar, a sophomore right-hander, had one of the best starts of his college career. He allowed only three hits and two walks while striking out 11 batters. Brandon Smith struck out two of the three batters he faced in the ninth to finish things up.

Offensively, The Bulldogs hit four doubles, including one each by Rowdey Jordan and Tanner Allen that brought in runs. Jordan finished 2-for-4 with one RBI and two runs scored.

Kamren James also doubled and hit a solo home run. It was the freshman’s ninth home run of the season.

“He is huge to our lineup. On weekends that we play well, he is right in the middle of that and he has put some huge weekends together for us because he can hit for average, he can hit for power and he can run,” Lemonis said of James. “You see him do a lot of things for us and it shows. He has nine [home runs] and 47 RBIs, that is a good year for a freshman.”

Graham hit a three-run home run and Elko followed with a solo shot to wipe out a 5-1 deficit in a span of three pitches.

In the top of the 11th inning, Hayden Dunhurst led off with a single, advanced to second base on a wild pitch, and scored on another single by T.J. McCants to give the Rebels their first lead of the game at 6-5.

Jacob Gonzalez and Graham delivered back-to-back RBI singles later in the inning to push the lead to 8-5. Taylor Broadway then retired Georgia in order in the bottom of the 11th to earn his 12th save of the season.

Graham finished the game 3-for-6 with four RBIs for Ole Miss. Gonzalez had a solo home run among his three hits, and drove in two runs.

Ole Miss will enter the final game of the regular season in fifth place overall in the SEC. It can clinch that spot with another win over Georgia on Saturday, but it appears unlikely the Rebels can earn one of the top four seeds.

The win was also the 1,500th of LSU coach Paul Mainieri’s career.

Jake Dugas and Cade Doughty both homered for LSU, which erased an early 6-2 deficit. After the Tigers scored four times in the fifth inning — Doughty hit a three-run homer — nobody scored again until the 13th.

Zach Arnold delivered a two-run single to snap the tie, Doughty drove in two more runs with a double, and Brody Drost and Drew Bianco each hit RBI singles to give LSU a 12-6 lead.

Austin Bost hit a three-run home run for Texas A&M (29-26, 9-20), and Ray Alejo was 2-for-7 with two RBIs and two runs scored. With the loss, the Aggies were eliminated from contention for one of the last two spots in the SEC Tournament.

Mario Lopez (6-0) allowed two runs in 3 1/3 innings of relief to earn the win for Jackson State. Steven Davila pitched the last 1 1/3 innings without allowing a run for his seventh save.