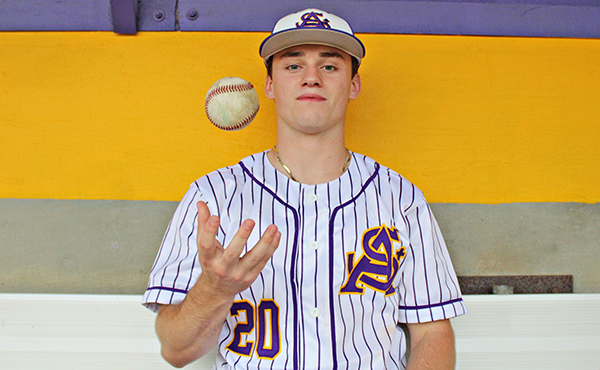 Ever since he was young, Wes Warnock said he dreamed of one day playing college baseball. It wasn’t until last year that he thought it might actually be a possibility.

“Last summer I was playing on a summer ball team and had two college coaches come watch me at a game. That’s when I knew I had the chance to really go and play at the next level,” the St. Aloysius senior center fielder said.

Warnock put in some extra time in the weight room, which helped him hit plenty of line drives this season. It also helped him to lift the pen that weighed just a couple of ounces and sign a scholarship offer on Tuesday.

Warnock signed with Mississippi Delta Community College, fulfilling his dream and opening up an opportunity to continue his career at the next level.

He’ll join St. Al alumni Haden Luke and Kieran Theriot, who signed in 2020, on the Trojans’ roster next season.

“I went on a visit and met the coaches, and I just really liked the atmosphere. I think I fit in there a lot. It’s my type of baseball,” Warnock said. “I’ll have two teammates that I know really good and I can’t wait to play with them next year.”

Warnock hit .310 in the 2020 season that was shortened to only nine games because of the COVID-19 pandemic. He started slow this season, with only two hits in his first seven games, but then caught fire and never slowed down.

Warnock finished the season on a 20-game hitting streak. He led Warren County with a .494 batting average, hit five triples, two home runs and scored 36 runs. He had 21 RBIs.

“I went through a little slump. Then once district play started I was hitting consistently every game,” Warnock said. “I was thinking too much in my head. I just got up there and hit.”

The strong senior season solidified Warnock’s status as a college prospect and, St. Al coach Sid Naron, helped to create a surge of confidence that fed on itself and grew stronger every day.

“We’ve known for two or three years that he was going to be a guy who had an opportunity to play,” Naron said. “I think when it really clicked for him was not necessarily when somebody showed interest in him, but when he realized he did belong and he did deserve the opportunity.”

If he wasn’t sure he belonged before, Warnock said he certainly feels like he does now.

“Ever since I was young I dreamed of playing college ball. And then as I got older I realized I needed to work harder,” Warnock said. “Hard work paid off.”