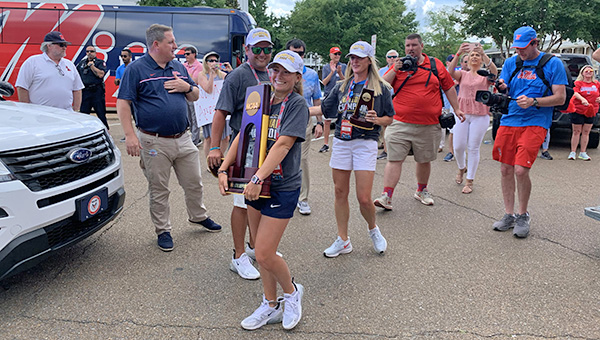 Ole Miss women’s golfer Kennedy Swann holds the NCAA Division I National Championship trophy while getting off a double decker bus at a victory rally and parade on the Downtown Square in Oxford on Thursday. The Rebels defeated Oklahoma State 4-1 to claim the school’s first national championship for a women’s team sport on Wednesday. (Jake Thompson/Oxford Eagle)

SCOTTSDALE, Ariz. (AP) — Julia Johnson wrote out a list of goals when she arrived at Ole Miss to play golf for a program that had not won so much as an SEC title.

“Part of me thought we could do it. Part of me thought, ‘This is a big dream,’” Johnson said Wednesday after the Rebels overwhelmed Oklahoma State, 4-1, to win the NCAA Women’s Championship. “I don’t think it’s hit me yet. We’re going to cherish this forever.”

It was the first national title for Ole Miss in any women’s sport. The team returned to Oxford on Thursday and were greeted with a victory rally and parade through The Square.

Kennedy Swann and Andrea Legnell led the way for the Rebels by completing perfect weeks at Grayhawk Golf Club, winning all three of their matches.

Chiarra Tamburlini set the tone for Ole Miss in the third of five matches. She was 6 up at the turn over Lianna Bailey, and her 6-and-5 victory was the largest margin for the final round since the NCAA switched to match play in 2015.

Right behind her was Johnson, never giving any hope in a 4-and-3 victory over Rita Tatematsu.

The key, however, came at the front of the lineup.

Swann faced Maja Stark, the Cowgirls’ best player and No. 7 in the women’s world amateur ranking. Swann fell behind after three holes, tied the match and then won three straight holes to take a 3-up lead to the back nine.

Stark holed a long birdie putt on the 11th and birdied the par-3 13th to get within 1 down. But she couldn’t catch up to Swann, and it ended on the 17th.

Stark hit driver on the 272-yard par 4 to pin-high just left of the green. Swann laid up with an iron that didn’t quite clear the rough. No matter. She hit wedge the perfect distance and it rolled out to tap-in range for a conceded birdie.

Stark pitched it 6 feet by the hole and missed the birdie putt that gave Swann a 2-and-1 win.
Behind her, Lignell rallied from an early deficit to take her first lead on the 13th hole over Isabella Fierro, who had not trailed all week. Lignell then had Fierro putt from 2 feet on the next hole, and Fierro missed to fall 2 down.

Lignell holed the winning putt from 6 feet for par on the 17th hole for a 2-and-1 victory, and the celebration was on.

Ole Miss was gracious in victory, its players waiting on the edge of the 17th green to rush over to Lignell, then pausing to let her bump fists with Fierro. And then the tears began to flow.

“We were nowhere close. We worked our tails off to get here,” said Swann, with face stickers that had “Flim Flam” on one cheek and “Bim Bam” on the other. We’ve finally proven we belong. Ole Miss is a good team and we’ll be around for a long time.”

HOOVER, Ala. — Mississippi State had a short and ugly stay in Hoover. Jordan Beck and Pete Derkay each had... read more