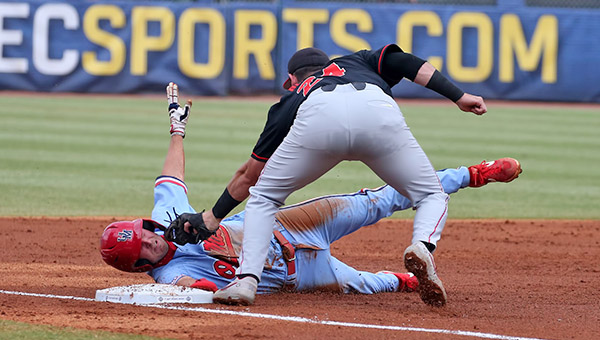 HOOVER, Ala. — The Ole Miss Rebels rubbed the sleep out of their eyes, shook off a bit of frustration, and stayed alive at the Southeastern Conference baseball tournament.

Drew McDaniel had 11 strikeouts in 6 2/3 innings pitched, and Jacob Gonzalez went 2-for-4 with an RBI and a run scored as Ole Miss defeated Georgia 4-0 in an elimination game Thursday afternoon.

Ole Miss (40-18) played about 12 hours after losing to Vanderbilt 5-4 on a walk-off hit just after midnight Thursday. It will get a chance to rest up before its next elimination game, Friday at 6:30 p.m. The Rebels will face the loser between Arkansas and Vanderbilt, who were set to play the late game in Thursday’s session.

Kevin Graham got Ole Miss off to a good start against Georgia by hitting a solo home run in the second inning. Gonzalez hit an RBI single in the third, and an error at the end of his second base hit in the fifth brought in another run to make it 3-0.

Gonzalez also scored into the Rebels’ final run of the game, on a single by Peyton Chatagnier in the fifth inning.

McDaniel allowed four hits and two walks, and hit one batter during his outing, but worked out of trouble on several occasions and avenged a poor outing against Georgia (31-25) five days earlier.

In the regular-season finale last Saturday, McDaniel allowed five runs in three innings against the Bulldogs.

“He just had a different confidence level today, I feel. He was pitching with some swagger, if you will. That’s how he is successful. He just pitches like that. Just very confident and knowing no one’s going to beat him. That’s how he does it,” Gonzalez said of his teammate McDaniel.

Brandon Johnson and Taylor Broadway finished the game with a combined 2 1/3 scoreless innings of relief for Ole Miss. They struck out three batters, walked none, and allowed only one hit.

SCOTTSDALE, Ariz. (AP) — Julia Johnson wrote out a list of goals when she arrived at Ole Miss to play... read more