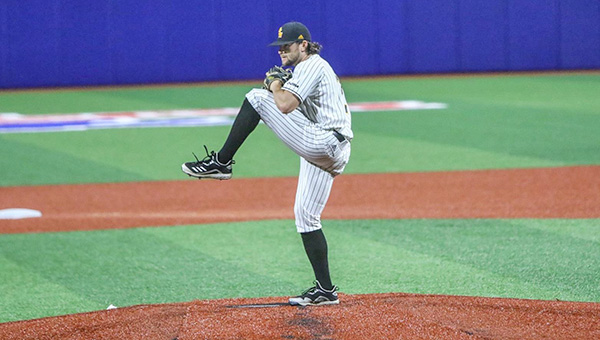 RUSTON, La. — By putting in a solid night of work, Southern Miss earned a good afternoon of sleep.

Because of rain earlier in the day — as well as a five-hour game between Louisiana Tech and UTSA right before it — the fourth and final game of day one of the C-USA Tournament did not actually start until day two. It was the latest start (12:15 a.m.) and finish (2:59 a.m.) in tournament history.

It could have gone even later, too. Sargent’s grand slam in the bottom of the eighth inning ended the game via the mercy rule.

Will McGillis drove in two runs with a triple in the first inning, and Reece Ewing and Danny Lynch both hit RBI singles as Southern Miss (36-17) jumped out to a 4-0 lead.

A two-run double by Dustin Dickerson in the third stretched it to 6-0. Dickerson finished 3-for-3 with two RBIs and one run scored.

Stanley, meanwhile, dominated Western Kentucky (26-28) from start to finish. He pitched an eight-inning complete game, and allowed three hits and one walk in addition to his 14 strikeouts. The Hilltoppers did not score until Matt Phipps hit an RBI double in the top of the eighth.

Phipps also hit a one-out single in the sixth inning that ended Stanley’s bid for a perfect game. Stanley retired the first 16 batters he faced, 10 of on strikeouts.

The victory allowed Southern Miss to sleep in on Thursday. It advanced to the winners’ bracket and won’t play until 7:30 p.m., when it takes on No. 2 seed and tournament host Louisiana Tech.

Western Kentucky will play UTSA in an elimination game at 4 p.m.

That game lasted 4 hours, 59 minutes to set the record as the longest in C-USA history, 10 minutes more than Marshall and Louisiana Tech went in 2019, and along with the earlier rain delays pushed the start of the Southern Miss-Western Kentucky game past midnight.