Vanderbilt gets walk-off win vs. Ole Miss at SEC Tournament 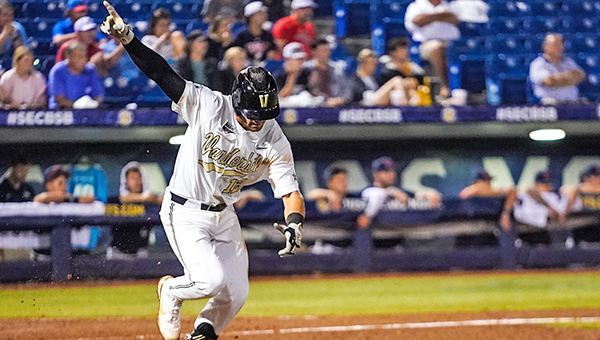 HOOVER, Ala. — The first late-night game of the Southeastern Conference baseball tournament provided plenty of drama — and no small amount of frustration for Ole Miss.

Vanderbilt (40-13) advanced to the winners’ bracket to face top-seeded Arkansas Thursday at 8 p.m. Ole Miss (39-18) has to turn around and play Georgia in an elimination game at 1 p.m.

Tim Elko hit a solo home run in the eighth inning — his second of the game — to give Ole Miss a 4-3 lead. Elko also hit a three-run home run in the sixth inning. He finished 3-for-4 with four RBIs.

Vanderbilt rallied in the ninth, however. A single, a walk and another single by Isaiah Thomas brought in the tying run. After a wild pitch, Keegan flicked his bat at a pitch low and away and sent the ball into right field to bring in Enrique Bradfield Jr. with the winning run.

The game-winner was Keegan’s only hit in five at-bats.

“I think I was just trying to do too much at the beginning of the game. Trying to be someone who I’m not,” Keegan told the SEC Network after the game. “In my fourth at-bat I barreled that ball to second base and I just felt better from there on out. That last at-bat, all I had to do was put that ball in play.”

Tate Kolwyck had two hits and two RBIs for Vanderbilt, and Thomas was 2-for-5 with one RBI.

Vanderbilt starter Christian Little allowed three hits and one run, and struck out seven in 5 1/3 innings but wound up with a no-decision. Ole Miss pitcher Derek Diamond had a similarly strong outing, going 5 1/3 innings and allowing two runs on four hits. Diamond struck out eight batters and walked two.