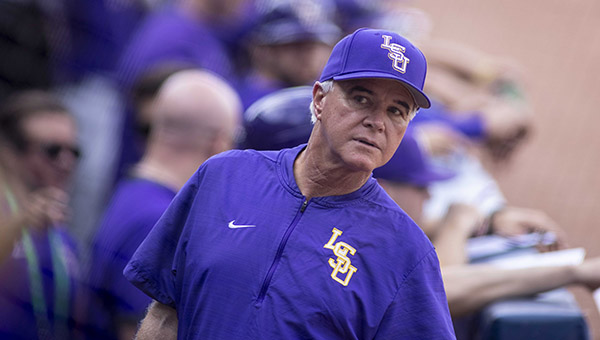 LSU baseball head coach Paul Mainieri announced Friday that he will retire at the end of the season. Mainieri coached LSU for 15 seasons and led the Tigers to the 2009 national championship. (Vasha Hunt/Southeastern Conference)

BATON ROUGE, La. (AP) — LSU baseball coach Paul Mainieri, who leads active Division I coaches in career victories and won a national championship with the Tigers in 2009, announced Friday that he is retiring at the end of this season.

The 63-year-old Mainieri has coached for 39 seasons, the last 15 with LSU. If the Tigers (34-22) receive a bid to the 64-team NCAA tournament, he’ll continue to coach as far as LSU advances before his tenure officially ends.

“I have been the luckiest guy in the world to have lived out a childhood dream of becoming a college baseball coach,” said Mainieri, who also coached at St. Thomas (1983-88), Air Force (1989-94) and Notre Dame (1995-2006). “It’s very difficult to leave a profession that I truly love, but I’m so grateful for the amazing opportunities that have been presented to me through the years.”

Mainieri’s six SEC tournament titles ties him with Bertman and former Alabama coach Jim Wells for the most in league history.

“To have carried the torch of a program built by Skip Bertman, the greatest college baseball coach of all time, has been a tremendous privilege,” Mainieri said.

LSU advanced to the College World Series five times under Mainieri — the last in 2017, when it lost to Southeastern Conference rival Florida in the championship series.

Mainieri is a four-time national coach of the year who was inducted into the American Baseball Coaches Association Hall of Fame in 2014.

The Tigers have endured an up-and-down season in 2021, by the program’s high standards. They have a 34-22 record and were eliminated from the SEC Tournament with a 4-1 loss to Georgia on Wednesday. It’s the first time since 2005 that LSU has not won at least one game in the SEC Tournament. The Tigers still hope to earn a berth to the NCAA Tournament, however, when the 64-team field is announced Monday morning.

“Paul Mainieri has made an immeasurable impact not only at LSU, but across college baseball,” LSU Athletic Director Scott Woodward said. “He has honored the game he loves with his class, his character, and his commitment to excellence. We are forever grateful for the championships he has won, the student athletes he has inspired, and memories he has gifted our fans.”

Mainieri was born in Morgantown, West Virginia, and raised in Miami.

He played at LSU as a freshman in 1976 before playing one season for his father, Demie, at Miami-Dade North Community College. He then spent two seasons at the University of New Orleans, playing second base and helping the Privateers win two Sun Belt Conference titles and advance to the 1979 NCAA Tournament.

HOOVER, Ala. — Another powerful pitching performance pulled Ole Miss out of the losers’ bracket and into the semifinals of... read more