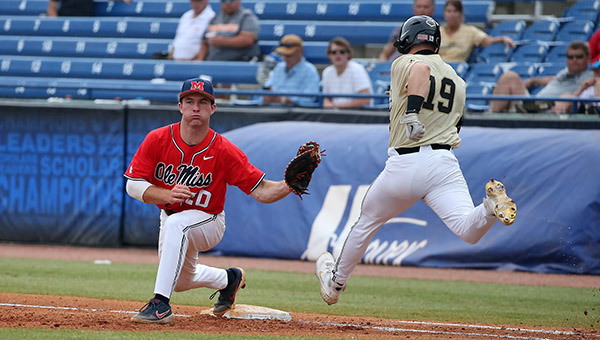 HOOVER, Ala. — Another powerful pitching performance pulled Ole Miss out of the losers’ bracket and into the semifinals of the Southeastern Conference baseball tournament.

Tyler Myers allowed one run and struck out six in seven innings, and Brandon Johnson finished with two innings of scoreless relief as Ole Miss beat Vanderbilt 4-1 in an elimination game Friday afternoon in Hoover.

Ole Miss (41-18) won its third elimination game of the tournament and avenged an earlier loss to Vanderbilt (40-15). It will face top-seeded Arkansas in the semifinals Saturday at 3:30 p.m. It’s the third consecutive season in which Ole Miss has reached the SEC semifinals.

The other semifinal will feature Florida vs. Tennessee at noon. Tennessee advanced out of the losers’ bracket by beating Alabama 11-0 in an elimination game earlier Friday.

Ole Miss’ pitchers have allowed one run and three walks in their last two games in the tournament — a shutout win over Georgia on Thursday and Friday’s victory against Vanderbilt. Overall, their four starting pitchers in the tournament — Doug Nikhazy, Derek Diamond, Drew McDaniel and Myers — have combined to allowed five earned runs and six walks, with 32 strikeouts in 25 innings pitched.

Myers, whose previous longest outing was three innings on April 13 against Austin Peay, gave the Rebels a quality start when they desperately needed it. He gave up two singles to start the game, and then retired the next seven batters he faced.

The only run Myers (4-2) allowed scored after he left the game. He was pulled after the first two batters of the eighth inning reached base. Johnson replaced him and got Dominic Keegan to hit into a double play, with one of the inherited runners scoring on the play.

Ole Miss’ offense, meanwhile, was powered by Kevin Graham. He went 2-for-3 with a solo home run. T.J. McCants hit an RBI single, Calvin Harris hit a sacrifice fly, and Peyton Chatagnier collected an RBI with a bases loaded walk.

Ole Miss only had six hits in the game. Vanderbilt starter Jack Leiter (8-3) lasted 6 2/3 innings and allowed three runs while striking out eight and walking two.