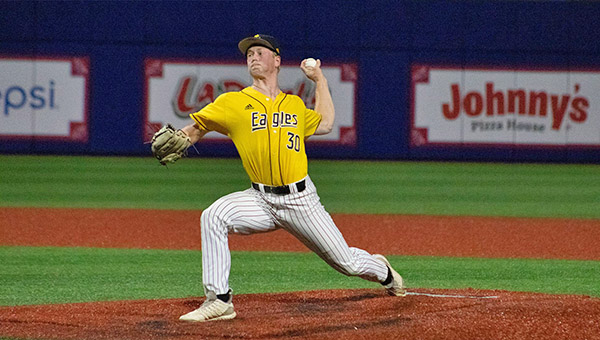 RUSTON, La. — Southern Miss is done working the late shift for a while.

Three pitchers combined to allow one run and strike out 11 batters, and Will McGillis went 3-for-4 with two RBIs as Southern Miss beat Louisiana Tech 4-1 in the Conference USA baseball tournament on Thursday.

After playing — and winning — two games that ended long after midnight, Southern Miss (37-17) advanced to the semifinal round and earned a day off. The Golden Eagles won’t play again until Saturday at 12:30 p.m., against the survivor of Friday’s elimination game between Western Kentucky and Louisiana Tech (37-17).

Southern Miss needs to lose twice on Saturday to be eliminated from the tournament, or win once to advance to Sunday’s championship game. If it loses the first game against Western Kentucky or Louisiana Tech, the teams will play again at 7:30 p.m. Saturday.

Southern Miss ran its winning streak in the C-USA Tournament to eight games, and is now one win away from reaching the championship game for the fifth consecutive time. It won the tournament in 2016, 2018 and 2019.

Walker Powell allowed one run in 4 1/3 innings, and then Ryan Och followed him with four innings of scoreless relief to earn the victory. Powell struck out three batters and Och (7-0) struck out seven.

Hurston Waldrep got the last two outs in the ninth inning, after Och gave up a pair of singles, to earn his second save of the season. He needed just eight pitches to get a strikeout and a groundout to second to seal the victory.

The only run Louisiana Tech could muster was in the fifth inning, when Hunter Wells drove in Alex Ray with a single.

While the Southern Miss pitchers were keeping Tech off the scoreboard, it was slowly tacking on runs. The Golden Eagles first struck in the third when Reed Trimble delivered an RBI single.

McGillis added RBI singles in the fourth and eighth innings, and Fischer had one in the seventh. McGillis and Danny Lynch had three hits apiece for USM, while Gabe Montenegro doubled, stole a base and scored a run.

HOOVER, Ala. — The Ole Miss Rebels rubbed the sleep out of their eyes, shook off a bit of frustration,... read more