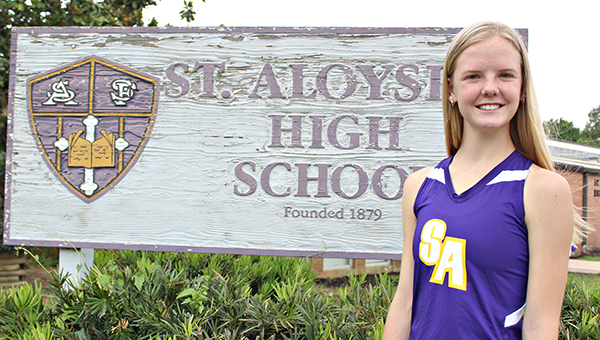 When she was little, Cati Mathews recalls telling her mother she “wanted to run and jump over things.”

It took a while, and a bit of a happy accident, but Mathews found the perfect way to combine both of those passions into a successful pursuit.

Mathews, a junior at St. Aloysius, won the MAIS Class 4A championship in the 300 meter hurdles at this year’s state track and field meet. She was the only female athlete from Warren County to win a state title in an individual event, which also put her atop the podium as The Vicksburg Post’s 2021 girls’ track and field Athlete of the Year.

“I didn’t think I would be able to get it. I thought it would go to a senior. Then when they said it was me I said, ‘Oh. OK,’” Mathews said with a laugh.

Mathews has been a strong contributor to St. Al’s track team for several years. She competed in the state meet as part of a relay team as an eighth-grader in 2018, and won bronze medals in the high jump and 4×400 meter relay the following year.

There was no state meet in 2020 because of the COVID-19 pandemic, but when Mississippi’s athletes returned to the track this spring Mathews was at the front of the pack.
Just not in the event that became her best.

Mathews was running the 400 meters for most of the season until, one day in practice, St. Al coach Michael Fields decided to make a switch.

“We do hurdle drills to warm up and I saw a couple of girls and went and looked at the competition,” Fields said. “Instead of putting Cati in the 400, where she kept getting third and fourth, I said I can use that speed in the hurdles and I knew she would be an instant success in the 300 hurdles. She’s a natural.”

Mathews competed in the 100 and 300 meter hurdles for the first time at the MAIS District 4-3A meet. She finished fourth in the 100 and won the 300 by more than three seconds, and repeated the performance the following week at the Class 4A South State meet.

“It was difficult learning how to jump over them, because I did high jump and it’s a different stepping,” Mathews said. “At first I was jumping really high over them, and then I got better at going a little bit over them. Once I got the steps down I was like, ‘OK, I can do this.’”

At the state meet, Mathews completed her sudden journey to the top. She clocked a time of 47.51 seconds in the 300 meter hurdles to beat Silliman’s Chloe Shomon by eight-tenths of a second, and claimed her first gold medal.

“I didn’t really go into it thinking I was going to win, because coach just put me in and said do your thing and try to win it,” Mathews said. “When I won state I didn’t know how to react to it. So I was very excited that, being put into something for only a few weeks, and then coming out and winning it was like, ‘Wow, I did that.’”

Mathews wasn’t done, though. She managed to also finish third in the 100 meter hurdles, and got a silver medal along with Natalie Burke, Ally Doiron and Lillian Perniciaro in the 4×400 meter relay.

Mathews also notched fourth-place finishes in the 4×100 and 4×200 relays, and fifth in the high jump.

Although the 300 hurdles championship obviously meant more to her, Mathews said finishing third in the 100 hurdles was also special because of the work she put into it.

“For the 100 hurdles I was ranked fourth and pushing myself a lot harder than I usually push myself because I wanted this medal,” she said. “I wanted to medal in both of my individuals. As soon as I crossed the finish line in third I was like, ‘I did it,’ and I looked up in the stands and Coach Fields was screaming.”

Mathews now has five total medals in nearly 10 events all-time at the state meet, and has one year of high school competition left. Fields, who spotted her potential in the hurdles, thinks Mathews can have a special season in 2022 — and maybe even beyond.

“I think she’s got some great things in the future,” Fields said.