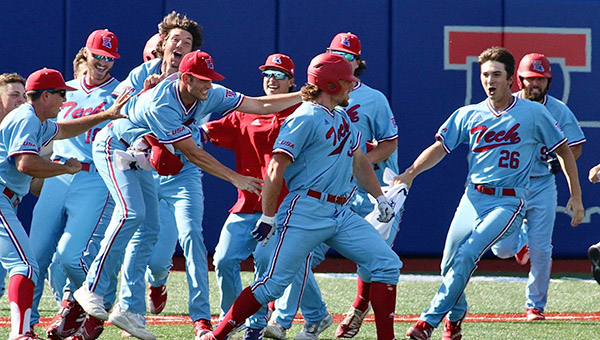 Louisiana Tech rallied from an eight-run deficit to beat Southern Miss 11-10 to survive in an elimination game Saturday afternoon. Then, on Saturday night, the Bulldogs scored four runs in the bottom of the ninth inning — the last two on a walk-off single by Phillip Matulia — to win 6-5 and advance to the C-USA championship game for the first time.

Southern Miss had an eight-game C-USA Tournament winning streak snapped, as well as its three-year reign as C-USA champion. It’s the first time since 2015 that the Golden Eagles have failed to reach the C-USA tournament championship game, after they won it all in 2016, 2018 and 2019 and lost in the 2017 title game. There was no tournament in 2020 because of the COVID-19 pandemic.

Southern Miss (37-19) is still one of 20 schools vying to host 16 NCAA Tournament regionals, as is Louisiana Tech. The regional sites will be announced Sunday evening, and the full 64-team NCAA Tournament field will be released Monday at 11 a.m. on ESPN2.

Louisiana Tech needed to beat Southern Miss twice on Saturday to reach the championship game, and did it with two improbable comebacks.

Christopher Sargent homered twice and drove in five runs, and Danny Lynch went 2-for-5 with a solo home run as Southern Miss built an 8-0 lead after four innings in the first game Saturday.

From the fifth inning on, however, Louisiana Tech flipped the momentum 180 degrees. It scored six runs on five hits in the fifth inning to get back in the game, added two more in the seventh and finally took a 10-9 lead in the eightg on a sacrifice fly by Steele Netterville.

Lynch hit the second pitch of the ninth inning over the center field fence to tie the game at 10, but Louisiana Tech wound up winning it in extra innings. Hunter Wells drew a one-out walk in the 10th inning and, after a fly out, Wells scored on a double by Netterville to give the Bulldogs an 11-10 victory.

Game two was a pitcher’s duel until both offenses exploded during a wild final two innings.
Manny Garcia hit a solo home run in the bottom of the eighth — part of a 5-for-5 night that tied a C-USA Tournament single-game record for most hits — to put Louisiana Tech ahead 2-1.

In the top of the ninth, Southern Miss turned to a pair of unlikely heroes to take the lead. Little-used freshman Slade Wilks hit a pinch-hit, three-run home run, and Brady Faust hit a sacrifice fly to put the Golden Eagles ahead 5-2.

Wilks has only played in about half of the Golden Eagles’ 56 games this season and entered with a .157 batting average. He also hit a game-tying three-run home run against Louisiana Tech on April 18.

Wilks had 51 at-bats in 27 games entering Saturday. Faust, another freshman, had five at-bats in 18 games.

Their contributions, though, wound up being a footnote to a wild finish.

Louisiana Tech scored a pair of runs in the bottom of the ninth on a sacrifice fly by Netterville and a bloop single by Cole MCConnell. Another single by Garcia and a walk to Jorge Corona on a full-count pitch loaded the bases with two outs.

That brought up Matulia, who also worked a full count. He lined a pitch into right field, a step in front of USM’s Reece Ewing, and pinch-runner Adarius Myers and McConnell both scored easily to give the Bulldogs their second walk-off win of the day.

Louisiana Tech and Southern Miss played 11 times this season. Tech won seven of them, including the last three on walk-off hits. Seven of the 11 games were decided by one run.