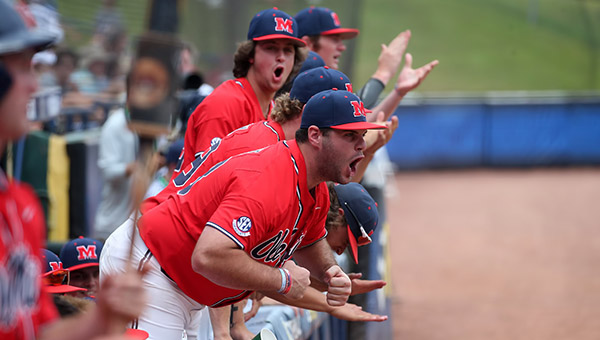 Two Mississippi schools will host regionals when the NCAA baseball tournament begins later this week. A third will have to go on the road.

Ole Miss and Mississippi State made the cut from among 20 teams vying to be among the 16 regional hosts, the NCAA announced Sunday evening. Southern Miss was also on the original list, but was passed over and will be on the road when the NCAA Tournament begins Friday.

The full 64-team tournament field will be announced live on ESPN2 at 11 a.m. Monday.

Mississippi State’s regional, as well as the others, will begin Friday. This marks the 15th NCAA Regional hosted in Starkville and the second in a row at the new Dudy Noble Field. In 2019, the Bulldogs used the home field advantage to win the regional and springboard a trip to the College World Series.

Ole Miss is hosting a regional for the 10th time — all since 2004. It also hosted in 2019, the last time the NCAA Tournament was held. There was no tournament in 2020 because of the COVID-19 pandemic. The Rebels have a 41-19 record this season and reached the SEC Tournament semifinals before losing 3-2 to eventual champion Arkansas.

The Southeastern Conference had seven of the 16 regional hosts. Joining the two Mississippi schools are South Carolina, Arkansas, Tennessee, Florida and Vanderbilt.

Arkansas beat Tennessee 7-2 on Sunday to win the SEC tournament championship for the first time since joining the league in 1992. The Razorbacks are ranked No. 1 in the country in most major polls and will likely be the No. 1 national seed in the NCAA Tournament.

“I think ever since we were ranked maybe No. 1, it just seems like the guys, they don’t talk about it. We’ve never talked to them about it,” Arkansas coach Dave Van Horn said after Sunday’s SEC championship game. “We handled it. I really like the way the team reacted today after they won the championship. They were happy and excited. Just like the coaches, but they didn’t go crazy. They know we still have work to do.”

Louisiana Tech is a regional host for the first time, and likely earned its spot at the expense of Southern Miss. Both teams were on the original list of 20 potential regional sites announced earlier this month, and Louisiana Tech won seven of their 11 head-to-head meetings this season.

Louisiana Tech beat Southern Miss twice on Saturday in the Conference USA Tournament to eliminate the Golden Eagles. Louisiana Tech lost 7-5 in 10 innings to Old Dominion in the C-USA championship game on Sunday.

Southern Miss was one of two Conference USA schools among the four that missed the cut from 20 host sites to the final 16. Charlotte, the league’s regular-season champion, lost both of its games in the C-USA Tournament and did not get picked.

Pittsburgh and Gonzaga were the other two teams passed over as regional hosts.