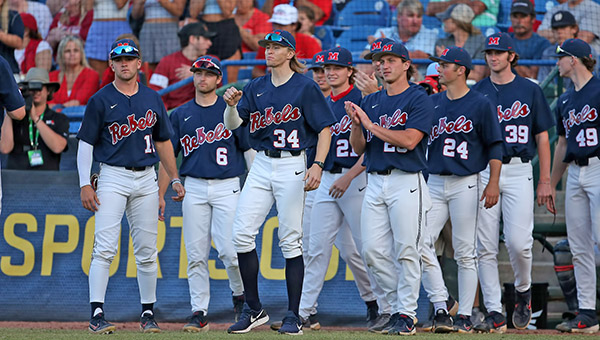 The road to Omaha for Ole Miss and Southern Miss runs through Oxford — and each other.

Southern Miss and Ole Miss will both in the Oxford Regional at Swayze Field, the NCAA announced Monday when it released the full 64-team bracket for the NCAA baseball tournament. They’ll be joined by Florida State and Southeast Missouri State for one of the most anticipated regionals in Mississippi in years.

“Obviously this is as good a regional as there is. I’m sure you hear that from everybody,” Ole Miss coach Mike Bianco said. “Florida State is in its 43rd consecutive regional and we know all about Southern Miss. Just a really good field. That’s what we do the next couple of days, is put the names to the side and focus on who’s hitting the ball and who’s pitching the ball.”

A high-stakes ead-to-head matchup between the Rebels and Golden Eagles will not come right away.

The Southern Miss-Florida State game will be televised on ESPNU. Ole Miss and Southeast Missouri State will be streamed on ESPN3.

Ole Miss is the No. 12 national seed, and the winner of its regional will face the winner of the Tucson Regional — featuring Arizona, Oklahoma State, Grand Canyon and UC Santa Barbara — in the super regional round.

Southern Miss is in the NCAA Tournament for the fifth consecutive season and Ole Miss for the third straight time. This is the third time they have been placed in the same regional, along with the 2005 and 2007 tournaments that were both in Oxford.

“We usually would have a feel for one another, but like a lot of other things this year it’s different,” Southern Miss coach Scott Berry said.

Southern Miss last played Florida State in a 2016 NCAA Tournament regional in Tallahassee. Florida State was an at-large selection for the 2021 NCAA Tournament after finishing third in the Atlantic Coast Conference’s Coastal Division and then going 1-1 in pool play in the league’s tournament.

The Seminoles earned 14 wins against teams that reached the NCAA Tournament, and was one of eight ACC teams to make the field of 64.

Southern Miss likely missed a chance to host a regional of its own by losing twice to Louisiana Tech in the Conference USA Tournament on Saturday. Louisiana Tech wound up with a home regional instead.

Berry, though, said he was happy just to get into the tournament and have a chance to continue the season. He noted that there were 34 at-large bids available, and Southern Miss grabbed one of only nine that went to teams outside of Power 5 conferences.

“Everything that’s happened in the past is in the past, and this is a new start. We’re looking forward to going up there and playing in a great baseball atmosphere,” Berry said. “I really didn’t have a preference of going anyhwere. The ability to be one of the 64 teams moving to the next season is the goal.”

Two Mississippi schools will host regionals when the NCAA baseball tournament begins later this week. A third will have to... read more