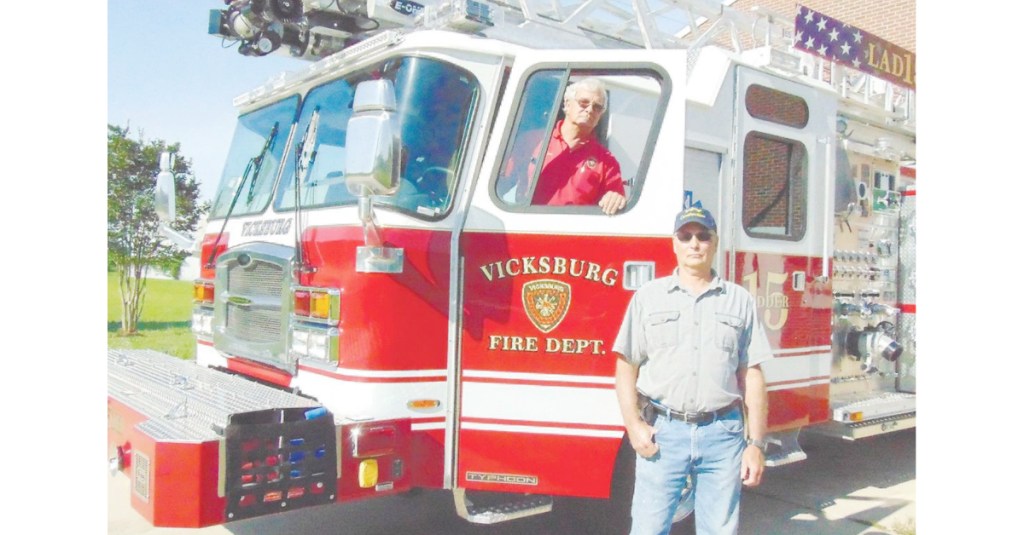 Jimmy and Michael Cogan have a combined 67 years of experience fighting fires in Vicksburg and Warren County. As Michael retired last weekend, the brothers recalled stories from their careers. (Photo by John Surratt | Vicksburg Post)

It took a fire and changes at the Grand Gulf to get Michael and James Cogan to become firefighters.

Their move to the Vicksburg Fire Department turned out to be a wise decision; between them, they have a combined 67 years of firefighting experience that has covered the tenures of six fire chiefs and many changes in the department.

The Warren County Board of Supervisors on May 25 honored Jimmy Cogan for his 30 years with the department. Older brother Michael retired at age 65 from the department after 37 years when he reported for his last shift Sunday at Fire Station 5, near the Vicksburg Municipal Airport off U.S. 61 South.

Jimmy, who is a captain at Station 2 on Indiana Avenue, said he won’t be far behind.

The initial event that led to the brothers’ career in the fire service occurred, as Michael put it, “a long time ago.”

The brothers and a first cousin were returning home from working at Grand Gulf when they came across the former Lloyd mattress building on fire.

“John Carlisle, who worked at the LaSalle-Deitch Building behind there, was by himself. The fire department hadn’t got there,” Michael said. “We pulled up and took chains and moved the 18 wheelers away from the building.”

When firefighters arrived, the men helped them. Fire department Capt. E. J. Wright, who knew the Cogans’ family, told them, “You boys ought to join the fire department,” Michael said.

In 1984, when Unit 2 at Grand Gulf shut down and Michael was laid off, he saw a newspaper ad that the fire department was hiring. He took the test and became a firefighter.

“I’ve seen a lot of changes through the years,” Michael said. “Back when I hired on, about 40 to 50 people showed up to take the physical agility test; that’s the first test in hiring, and then the next step was the written test, and that was held at the city auditorium because that was the place where they had the room for everybody taking it.”

Now, he said, the department is lucky to have six people show up to take the tests.

“Here lately, it’s been two or three,” Michael said. “It seems the young people don’t want to come to the fire department, or the police department, for that matter. We’re short-handed.”

And there have been changes in equipment. The biggest, Jimmy said, is the air packs.

When he first came to the fire department, he said, it had steel bottle packs where everyone had to use the same face mask.

“When I had a fire, after I was through, I was supposed to clean the mask, and when he came on duty (pointing to his brother) he’d better clean it up because everyone wore the same mask,” Jimmy said, adding now every firefighter is issued a mask.

He said the old bottles had a low-pressure hose that ran from a regulator to the face mask.

“If you were fighting a house fire and you ran out of air, you unscrewed that low-pressure hose, dropped it in your coat and keep going unless it was intense heat,” Michael said.

“When I hired on, we really didn’t have any volunteers in the county; that wasn’t organized,” Michael said. “We ran from county line to county line and the private on the truck stood on the tailboard of the truck.”

He recalled when the cotton gin at Eagle Lake burned and Engine 6 responded.

When the fire was out, he rode the tailboard all the way back to the station. “Sometimes when the truck would leave Central 2-3 people would be hanging on the tailboard,” he said.

Now, he said, the crews ride in the truck.

“I can remember several times having to go somewhere and pick up hose out of the street because a person had been promoted to lieutenant who wasn’t good at shifting (and hose fell off the truck),” Michael said. “Back then, there was a learning curve.”

Looking back on their careers, the brothers recalled incidents that stood out.

“Mine was Ergon, when that tall stack was on fire years ago,” Jimmy said. “I never will forget.”

He said they asked the captain which way they were going to run if the stack fell. The captain told one firefighter, “Son, we won’t move. There won’t be enough of us left to put in a cigar box. There were fuel tanks all around us and electrical; Ergon was having trouble getting the fuel shut off to that stack.”

Michael recalled a fuel storage tank fire at Champion Oil where the back of the tank facing the harbor split open.

“When we got there fuel was still spilling out, and it looked like a waterfall,” he said. “There was a chain-link fence and we were outside the fence spraying into the tank.”

During the fire, a 55-gallon drum exploded, causing everyone to flee the area. Michael’s partner on the hose, however, ran forward, pinning them against the fence.

“Some EMS calls stick with you,” Jimmy said. “Especially a child. That sticks with you.”

Being a firefighter, Michael said, means missing a lot of family activities, holidays and anniversaries.

“It takes a special wife to stick with you through all that,” Jimmy said. “I wouldn’t know how to act with an eight-hour day.”

“One-third of your life you spend here (at the station), “ Michael said. “One-third of the time, the guys on your shift are your family.”

One other improvement, Michael said, is the move that began under former Fire Chief Charles Atkins and was continued by Chief Craig Danczyk to keep crews together.

“The more you keep crews together and in one place, they get to know their territory better, they get to where they can work together better and you just have a happier department as a rule,” he said.

Leaving the department, Michael said, will be bittersweet.

“It’s been a good ride; it’s been a real good ride,” he said. “I’ve met a lot of interesting people; I’ve worked with some great folks. We’ve got some great young ones coming up; we’re just not getting enough of them.”