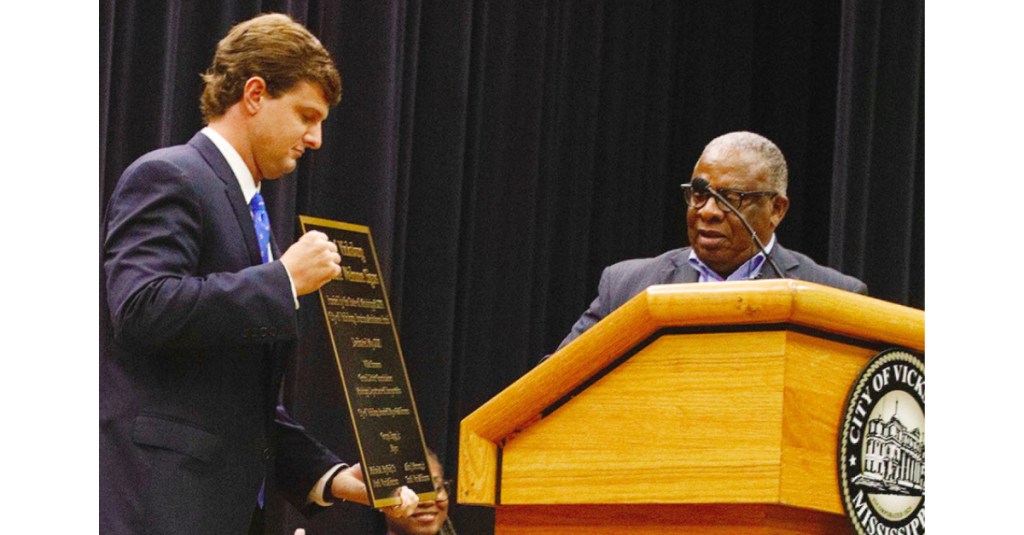 When he first took office, Mayor George Flaggs, Jr. made welcome signs for the city one of his goals.

Wednesday morning, at a special program at the Vicksburg Auditorium that goal was accomplished as the city dedicated two welcome signs that will greet travelers as they enter the city on the east and westbound lanes of Interstate 20.

He commended his Chief of Staff, Sam Andrews, with making the final push to get the signs up.

Flaggs said Andrews told him, “I know a project I want to take on.”

“He started out taking on this (sign) project with (Visit Vicksburg Director) Laura Beth (Strickland), people in the community and the street department and here we are,” Flaggs said.

After the program, Andrews credited Flaggs’ efforts and his relationship with the state government and the leaders of the Mississippi Department of Transportation.

“We were able to push through pretty quickly to get it finished. We were able to get the necessary permits and permission to construct the signs on MDOT’s right of way,” Andrews said.

“When he mentioned this was a priority of his, I knew it was time for us to go to work and get these finished, especially during this term,” he said. “It really will serve as a gateway to this entire corridor, and hopefully, a sight people will be excited to see when they enter Vicksburg and will be a point of arrival for years to come.”

Andrews said much of the site work was done in-house by city employees, which he said helped reduce the cost of the project.

Flaggs said the city had to meet a lot of requirements to get the signs, “but it’s a good fight; it’s a welcome feeling to get to this place where we exceeded our expectations.”

“It’s a great big sign and you ain’t going to be able to miss it if you’re coming into Vicksburg,” Former Commissioner of Transportation Dick Hall said.

He said a change in regulations allowed Flaggs and Transportation Commissioner Willie Simmons to get the signs. Simmons was unable to attend the dedication.

After the program, Flaggs said the signs will be accented with landscaping and lighting. He said the present signs at the Clay Street exit westbound and the eastbound Halls Ferry exit will be replaced because of errors in several spots.

“You can’t see it from a distance until you get close, and the manufacturer wanted to make good on his contract,” he said.

“It’s a great feeling to be mayor of a city that can erect a sign that says, ‘Welcome to …’ and show the progress and the growth and prosperity for the city,” Flaggs said. “I think this sign will create an attitude, not only toward the city but toward the people who travel to stop and see the beauty of it.”