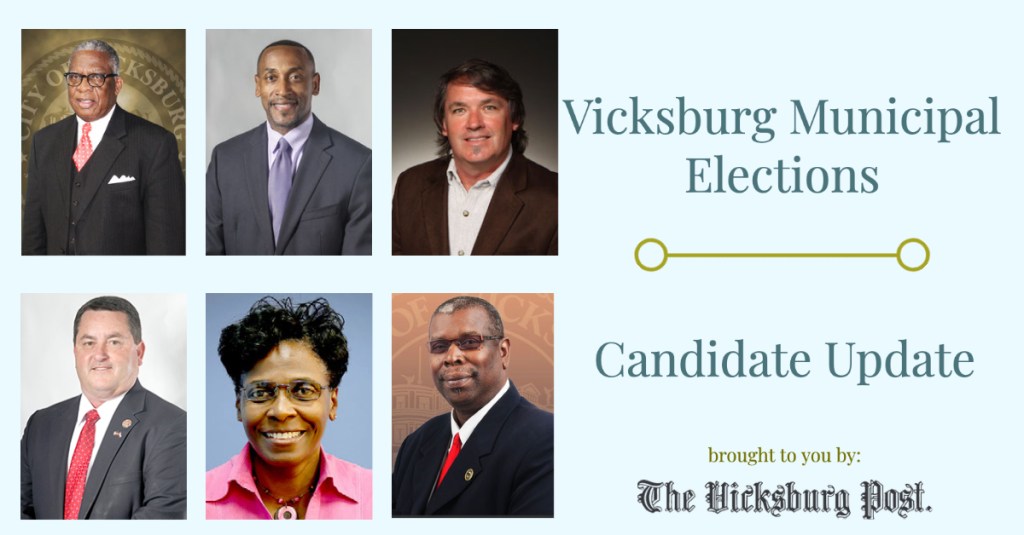 Mayor George Flaggs, Jr. led all candidates in campaign contributions and expenses for the June 8 municipal general election, according to campaign finance reports filed Tuesday with the City Clerk’s office.

Tuesday was the deadline for filing campaign finance reports for the general election, and the report covers a period from April 18 through May 29. Independent candidates, however, must report contributions and expenses from Jan. 1 through May 29.

All candidates for mayor and South Ward alderman filed reports Tuesday. North Ward Alderman Michael Mayfield was not required to file a report, according to state law, because he is unopposed.

Flaggs, who is seeking a third term, is running as an independent.

His largest contributions were $2,000 from Ace Recovery LLC of Vicksburg and three $1,500 contributions from Harold Underwood of Humble, Texas, John K. Hunter of Jackson and Reginald T. Crear of Ridgeland.

Flaggs’ biggest expense was $17,690 for advertising. Other large expenses included $8,909 to Chism Strategies of Jackson for consulting and advertising work, a $2,840 reimbursement to Antonia Jones for yard signs, $3,760 to Shawn Dorsey for T-shirts and $1,676.69 to H & M Promotional Products.

Kimble’s largest contribution since the April 27 runoff election was $2,500 from Ricky Hearn of Vicksburg. Other contributions to his campaign were $500 or less.

His largest expense for this report was listed as $2,198 for campaign materials from H & M Promotional Products. He also reported spending $250 in advertising since his last report.

Hollingsworth listed $12,500 in expenses for advertising, $1,230 to Jackson Specialty Advertising Inc. for T-shirts and $800 to Caleb Hollingsworth as his largest expenses.

He reports $1,000 contributions from Neel-Schaffer Engineering in Jackson and Mr. and Mrs. Steve Golding of Vicksburg, and a $700 contribution from Foam Packaging Inc. of Vicksburg. He also put in $1,500 of his personal money toward the campaign. Other reported contributions were $500 or less.

His largest expense was $12,147 for advertising.

Vickie Bailey, Monsour’s challenger, reported a year-to-date total of $2,380 in contributions with $445 non-itemized contributions and $4,944 in expenses with $210 cash on hand.

According to the report, all of Bailey’s contributions are less than $500 and her largest expense is $1,478 for yard signs from Signs on the Cheap of Austin, Texas.