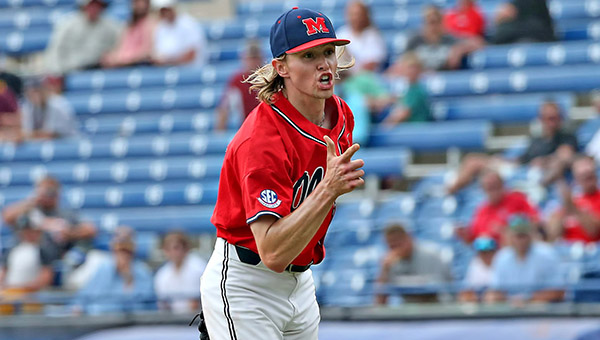 Ole Miss pitcher Tyler Myers gestures after getting an out in an SEC Tournament game against Vanderbilt last week. (Michael Wade/Southeastern Conference)

OXFORD — Ole Miss knows its path to get back to the College World Series for the first time in seven years, and it will take getting through a stacked Oxford Regional and then a trip to the desert.

The 2021 NCAA baseball tournament begins Friday, with the Rebels as the No. 12 national seed and paired with

No. 5 seed Arizona and the Tucson Regional. Ole Miss is hosting its third straight regional and 10th since 2004.
Before Ole Miss can begin packing its bags for a super regional out west, they will first have to get past a stacked Oxford Regional that includes in-state rival Southern Miss, Florida State and Southeast Missouri State.

“This team has this unique feel about them. A unique vibe where there’s a subtle confidence in them, Ole Miss coach Mike Bianco said. “They just want to play. I don’t think there was a lot of drama to it. They were anxious to see who the opponent was. … They’re worried about what’s in their dugout, which is a good thing.”

The Rebels (41-19) are the No. 1 seed and will face No. 4 Southeast Missouri State (30-20) at 7 p.m. Friday in the first round of the double-elimination bracket. The Redhawks won the Ohio Valley Conference tournament this year for the fourth time and this is their fourth appearance in the NCAA Tournament.

Redhawks ace Dylan Dodd will more than likely get the start against the Rebels on Friday. The left-hander went 9-1 in the regular season and postseason with an ERA of 2.78.

Southern Miss (37-19) is the No. 2 seed and will face No. 3 seed Florida State (30-22) at 2 p.m. Friday in the first game of the regional. They were named as one of the 20 predetermined host sites, but were unable to secure a regional in Hattiesburg after dropping two games to No. 16 seed Louisiana Tech in last week’s Conference USA Tournament.

The Golden Eagles are making their third postseason appearance in Oxford and first in 14 years. Ole Miss and Southern Miss did not meet in the regular season, as they normally do in Pearl, so any potential matchup this weekend will be the first of the season.

It was the first time since 1989 that Southern Miss and Ole Miss have not played each other in the regular season.

“It’s postseason baseball and we got a couple good teams coming in and that’s how it’s always going to be,” said Ole Miss’ Tim Elko. “It’s never going to be easy when you’re trying to get to Omaha. We’re ready for those teams to come in and some good competition but we’re a really good team as well.”

Southern Miss could be one of the dark horses to not only emerge from this regional, but make a run to the College World Series. The Golden Eagles have two pitchers, Walker Powell and Hunter Stanley, who were selected to the Collegiate Baseball All-America team on Thursday.

Powell is the Conference USA Pitcher of the Year. He posted a 9-2 record, with a 2.53 ERA and a team-best five complete games. In 81 2/3 innings, Powell struck out 79 batters and walked just 17.

“There’s a lot of tradition in that regional. A lot of storied programs. We’re glad to be a part of it,” Stanley said. “I think we’re playing our best ball right now. Even though we dropped two games (last weekend), I felt like we really were competing hard. I thought our bats were really good. I feel like we’re in a good spot.”