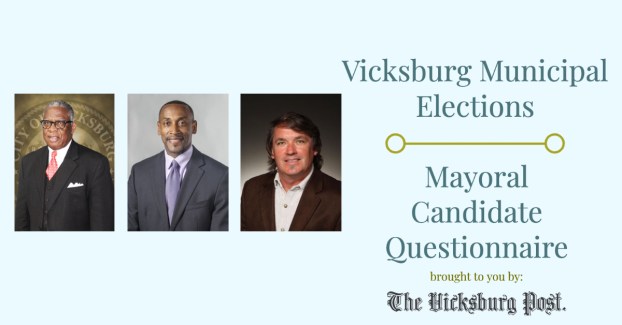 The Board of Mayor and Aldermen play a key role in Vicksburg’s economic development, and the candidates in Vicksburg’s municipal elections have their own thoughts on how to maintain forward progress in Warren County’s only municipality.

The Vicksburg Post recently invited the candidates competing in the June 8 municipal elections to respond to five questions, with topics ranging from crime management to education to economic development.

South Ward alderman candidate Vickie Bailey, Democrat, did not submit her responses by the June 4 deadline.

1) What are your thoughts on the forward progress of Vicksburg?

Incumbent Mayor George Flaggs, Jr.: In the past 8 years, I believe I’ve created a path to growth and prosperity for the city of Vicksburg like never before. As a result of this, people are excited and are making investments in the future of our city at some of the highest levels.

Mayoral Candidate Daryl Hollingsworth: My thoughts on the forward progress are that right now, we are standing on a crumbling infrastructure. The same questions are asked every four years, and Vicksburg buys into the empty promises every election year. How long do you want to keep asking the same questions? You can go back four years ago to what my platform was then, and it still remains the same. We still have the same issues we had four years ago, except with the addition of the increased crime. If our police department had not been dismantled and our youth programs cut, we wouldn’t have the increased crime we have now. You want to know why we have a 99.6 percent approval rating of the agenda for the Board of Mayor and Aldermen? In the past, any Board Member could add an item to the agenda. Then four years ago, that was changed. Now it takes two of the three board members’ approval for it to be placed on the agenda. Thus, when they have the Board meeting, the items on the agenda have already been decided. We need more transparency, we need to hear what our citizens have to say about items placed on the agenda. For example, Washington Street Park, there was no discussion before we gave it away. We can be the greatest city in Mississippi, but we have to face the reality of our situation and fix our infrastructure.

Mayoral Candidate Troy Kimble: The forward progress of Vicksburg is only evident in certain areas. True forward progress will not be apparent until we have positive tangible outcomes for all in Vicksburg. Vicksburg’s forward progress will come to fruition when we truly embrace and acknowledge the overall need for positive change. We must not sugarcoat the answers to the tough questions with political double talk and properly address our shortcomings to support positive growth. We cannot expect progressive outcomes when the foundation of our city, our citizens are not experiencing a better quality of life. Forward progress must include a vision for the city that includes everyone moving forward.

2) What do you believe is the root of the issue in terms of violent crime in Vicksburg, and how do you plan to address it?

Flaggs: I don’t believe that crime is any different in Vicksburg than anywhere else. We live in a society where respect for the law is not what it should be. I believe we’re going to have to implement more community policing and create a different mindset about violent crime and upholding the law. I plan to address this by first creating a homicide and gang prevention position so we can attack these kinds of crimes head-on by creating more preventive programs. I also intend to address the discharging of firearms within the city of Vicksburg to the fullest extent of the law.

Hollingsworth: Not to be redundant, but the leadership in our police department was dismantled four years ago. Four years ago, our current mayor ran on the promise that if he could get a second vote, he would get crime under control. He got his second vote, now our police department has gone from a peak of 87 police officers to currently having 35 to 40 full-time police officers and around nine part-time officers. It is ridiculous to think you can properly police a city of our geographical make-up with the number of officers we currently have. There are shifts where there are only three officers on duty at a time. We have to recruit qualified full-time officers to our city and provide them with strong leadership.

Kimble: The root of the issue of violent crime lies in social and mental issues not being proactively addressed. We must interact with the offenders prior to the offense. In which a lot of these incidents could have possibly been prevented with positive mentoring and life skills obtained at an early age. “It’s easier to build strong children than to repair broken men,” — Frederick Douglas. We talk about community policing, but are we really engaging the community properly? From a law enforcement standpoint, it is imperative to have the trust and respect of those we serve and reciprocate those qualities. We will recruit and train officers to serve sternly while enforcing the law safely with integrity, honor and professionalism.

3) What plans do you have to support Vicksburg’s education system and promote the wellbeing of our children?

Flaggs: Other than creating and supporting more educational programs in the community, I intend to continue supporting our educational system until we can get it right.

Kimble: I plan to have a working partnership with the School Board. I would like to have a liaison from the city attend their board meetings and report back any areas in which the city may assist. I also would promote an apprenticeship-type program with local business owners as a possible curriculum course. These classes will help develop customer service, proper work ethics and other employment skills Vicksburg needs for a trained and viable workforce. This in turn would help attract industry to Vicksburg while supporting our local business staffing needs. I would also support programs to strengthen our children’s educational and social well-being.

4) How would you promote the Mississippi Information and Technology Center, which is currently underway, and ensure its economic infusion to Downtown Vicksburg?

Flaggs: MCITy is the gateway to technological innovation and is the future of our economy. I will continue to promote and support this visionary center in any way possible, as I’ve done in the past, as it will transform our downtown area and all other areas of our city as a whole for generations to come.

Hollingsworth: I currently own several buildings in the block next to the Mississippi Information and Technological Center. I’ve recently completed the construction of 11 apartments in that block in anticipation of the housing need for MCITy. The last tour I took of it in April left me with the understanding that the Chamber, the Port Authority and ERDC Works would be occupying a portion of the building in October, with the remainder of the building completed in December. I sincerely hope this project comes to fruition, but I’ve also spoken with ex-board members that feel like it is all smoke and mirrors. When you look at the amount of state and federal money that has and will be spent on this project, think of all the affordable housing, youth programs and infrastructure needs that could have been met. How can you spend an average of $400 a foot on an existing building that was already standing and not being constructed from the ground up? To my knowledge, the most expensive apartments built in Vicksburg were built for $200 a foot and have a larger amount of moving parts.

Kimble: My mission would be to showcase the excellent and competitive quality of knowledge generated from our IT Center. Being an IT professional, I know firsthand the need for a quality Information Technology workforce. Vicksburg is unique, with ERDC and the Corps of Engineers on our home front. We could use this center along with other programs to attract and springboard government and private sector remote server and data center-type services to enhance our economy. This would allow our talent to return and remain in Vicksburg, thus amplifying our tax base.

5) How would you develop infrastructure to meet the needs of The Port of Vicksburg and its proposed expansion? Please be specific about how you would finance any upgrades.

Flaggs: We must continue to use relationships to call on federal and state governments to support Vicksburg’s infrastructure needs. At the same time, I’m committed to using some of the federal funds to fund necessary infrastructure upgrades by refinancing and restructuring our debt and financing our future needs without raising taxes.

Hollingsworth: Our current port is at 100-percent  occupancy and is considered the 14th largest inland port in the United States. With that being said, developing the 85 acres above our existing port that has never been developed would be low-hanging fruit. I would discuss with the 412 Engineering Group and The Honorable Bennie Thompson the possibility to use the 85 acres as a training ground for new recruits for the 412 Engineering Group. Right now, the current administration is talking about using the Baxter Wilson facility as a port once it is demolished. I worked there for 24 years, and Baxter Wilson is just sitting on sand that was pumped out of the river. So, I believe a lot of thought and research should go into the infrastructure of that facility. You are talking about a lot of heavy hauling on what is basically a desert when you start digging.

Kimble: Adequate research and comparison of areas similar to our topography and geographic makeup is needed, along with previous local data to support or dispel information as to why this has not been approved prior to my administration. We must ensure this is adequately and safely done and not just another talking point. I would assertively coordinate with subject-matter experts and legal financial sources for funding. This may also include private sectors who may occupy the port. An efficient and effective cost-sharing plan across federal, state and local funding sources would be implemented.

As an 11th grader, one of Ferris Andrews’s instructors told her she had a shot at becoming the valedictorian of... read more