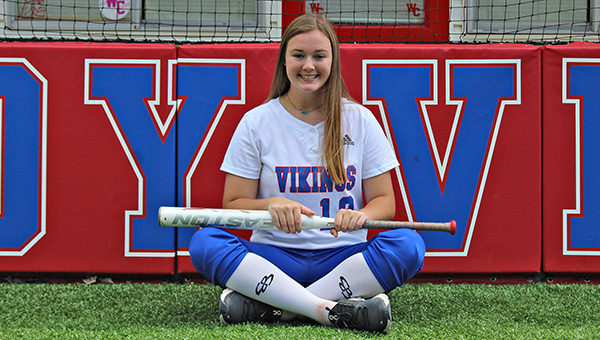 Warren Central's Abby Morgan is the 2021 Vicksburg Post softball Player of the Year. The sophomore ranked among the top hitters in MHSAA Class 6A this season with a .516 batting average. (Ernest Bowker/The Vicksburg Post)

When she joined Warren Central’s softball team, neither Abby Morgan nor her coaches knew quite what to expect.

The sophomore pitcher and infielder was carving out a reputation as a solid travel ball player, but had only played a handful of high school games for MAIS Class 2A member Porter’s Chapel Academy before changing schools. Making the leap to not only the varsity level, but to facing MHSAA Class 6A competition, brought plenty of question marks.

“This is our first year to have her, so we didn’t know what to expect coming in. I think that was one of her main goals for herself this year, was to hit the ball and hit it well, and she did that,” Warren Central coach Dana McGivney said.

Better than almost anyone, in fact.

In her first season at Warren Central, Morgan finished with a .516 batting average that not only led the team, it was among the best in all of Class 6A. She hit six doubles, drove in 19 runs, and also took the reins as the Lady Vikes’ lead pitcher.

Following her breakout season, Morgan is collecting one more hit — The Vicksburg Post’s 2021 softball Player of the Year award.

Morgan spent three seasons at Porter’s Chapel, and played in nine games as they reached the MAIS Class 2A championship series in the fall of 2019. She transferred to Warren Central before the 2020-21 school year and tried to find her niche among her new teammates. She said she felt welcomed right away.

“All of my teammates and coaches made me feel comfortable and that I was meant to be here and deserved my position,” Morgan said.

She soon showed she deserved it, as well.

Morgan hit safely in Warren Central’s first 12 games, capped by a 3-for-3, three RBI performance in a 16-1 win over Vicksburg on March 27. After two hitless games — the only time her batting average dipped below .500 the entire season — she finished the season with another five-game hitting streak.

As a pitcher, Morgan appeared in 18 games and started 10. In a team-high 76 innings she had 46 strikeouts and 21 walks, and a 4.61 ERA. Morgan served as the designated hitter and designated player when she wasn’t pitching.

“This is the best (season) I’ve ever had. I had bad times where I was learning my mechanics, but it’s come into a progression of me getting better and better and this is my best year,” Morgan said. “It’s just to get in the box and not think. You have to go in there with confidence, go in there with, ‘I’m going to hit the ball.’”

McGivney said she was impressed with the way Morgan handled all of the adjustments she had to deal with. She felt Morgan’s limited high school experience at PCA and several years of playing on travel teams made the transition easier.

“I think that (playing at PCA) and the experience of having played tournament ball, and just having the confidence. I think it was an adjustment coming over, but she made it pretty effortlessly,” McGivney said.
Morgan is part of a young and talented core of players that is promising a bright future for Warren Central. Only a couple of seniors were in the regular rotation of players this season, and many like Morgan were underclassmen.

Morgan has big dreams as well, with hopes to eventually play college softball. Moving over to face the toughest competition in Mississippi helped her take a big step toward that goal.

“You definitely see a difference in the level of competition,” Morgan said. “I think it’s better for me to see that, because as I’m wanting to go to college you’ll see bigger levels and so this helps.”

One the things Brian Ellis tells every team at the beginning of the season, he says, is to “make a... read more