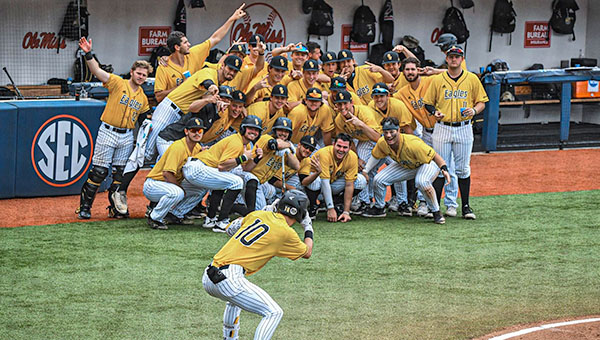 OXFORD — The only thing that could slow Southern Miss down on Saturday was the weather.

A day after leaving 10 runners on base in a loss to Florida State, Southern Miss (38-20) had 24 hits and scored multiple runs in every inning from the third through the seventh.

“We did a lot of things well today. There wasn’t a whole lot I can remember that went wrong, in all honesty,” Southern Miss coach Scott Berry said.

Southern Miss (38-20) advanced to play another elimination game Sunday at 1 p.m. against the loser of Saturday’s late game between Florida State and Ole Miss.

“In boxing, when your back is against the ropes you’ve got to be able to come out and get back in the middle of the ring. That’s what we were able to do today,” Berry said. “Hopefully it’ll be a confidence booster for us. Certainly, you’ve got to feel good.”

Southeast Missouri State (30-22) was eliminated from the regional with Saturday’s loss.

A lightning delay halted the game for about an hour in the bottom of the seventh inning. By then, Southern Miss had a 20-0 lead.

Montenegro hit an RBI single in the ninth inning to give the Golden Eagles 21 runs and set a postseason record for the program. The previous high mark was 20 runs, set in a 20-13 win over South Alabama in an NCAA regional in 1999. The overall school record is 26, set in 2009 vs. Central Florida

“We ran the bases extremely aggressive, going from first to third and creating opportunities, and then taking advantage of them,” Berry said. “Yesterday we saw ourselves leave 10 on and it really hurt us. Today we left nine on and we got 21 hits. That was certainly the difference.”

After two scoreless innings, Southern Miss got rolling in the third. Singles by Trimble and Danny Lynch brought in runs as the Golden Eagles batted around and scored four times.

Sargent’s two-run home run in the fourth keyed another four-run outburst, and Dustin Dickerson hit a two-run homer in the fifth to make it 10-0.

Southern Miss batted around again in both the sixth and seventh innings, scoring five runs each time, to turn a lopsided game into a remarkable blowout.

Sargent, Lynch, Trimble and Montenegro all had three or more hits. Montenegro went 5-for-6 with two RBIs, and scored four runs. Trimble was 5-for-7 with a pair of doubles and five RBIs.

Sargent also drove in five runs with his three home runs, and Lynch was 4-for-5 with a homer and two RBIs. Sargent’s three home runs tied a USM record, and the six home runs as a team tied a record for an NCAA Tournament game.

Powell did not walk a batter, and did not return to the game after the long lightning delay despite throwing only 81 pitches.

“The mood in the dugout was high energy,” Powell said. “We came out swinging, which is all you can ask as a pitcher, and we didn’t stop until the last inning.”