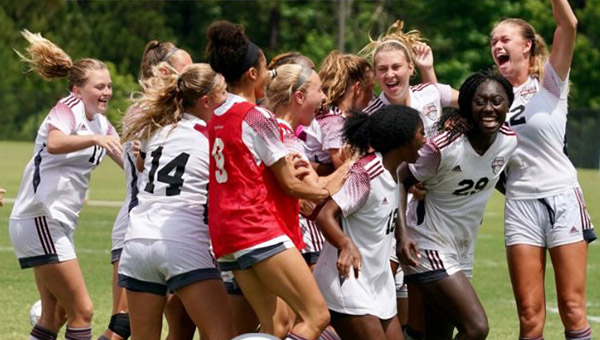 Holmes Community College needed a little extra time to get there, but pulled within a step of its ultimate goal with a golden goal.

Phoenix prevented an all-Mississippi national championship game from happening by beating Jones College 2-0 in the other semifinal on Tuesday. Phoenix and Holmes are the top two seeds in the 12-team tournament.
The championship game will be streamed online at https://www.njcaa.org/network.

Holmes and Heartland played a thriller that went down to the end. They played a scoreless hour of soccer before trading goals in a two-minute span. Cora Perez scored in the 61st minute to put Heartland ahead 1-0, and Ellis answered with an unassisted goal in the 63rd minute to tie it.

They wound up going to sudden death overtime before Ellis scored off an assist from Ravynne Wilson to give the Bulldogs the 2-1 victory.

Former Warren Central star Layken Stockstill made two saves while playing 62 minutes in goal for Holmes, although her defense kept her from being too busy. Heartland only took nine shots in the game, compared to 35 for Holmes. One of Stockstill’s saves came during the sudden-death overtime period.

Hearltand keeper Bekah Nielsen made 16 saves while going the distance in net.

Two other former Warren Central players, Laney Smith and Madelyn Polk, are also on Holmes’ roster. Smith, a forward, had one shot on goal in Tuesday’s match.