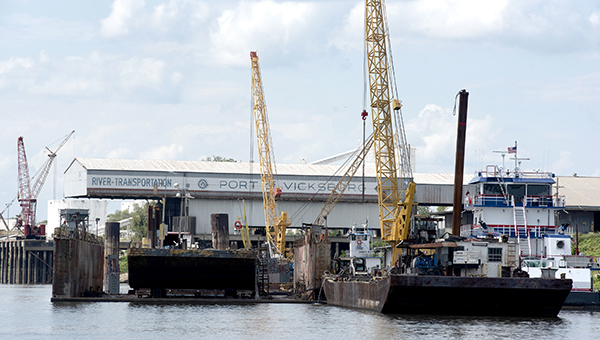 The Port of Vicksburg is the15th busiest inland port in the United States. Businesses and industries at the port employ more than 4,000 people.(Courtland Wells/The Vicksburg Post)

The Vicksburg Board of Mayor and Aldermen has hired Neel-Schaffer Engineers to help the city get a $25 million grant to build a new port in the area near Entergy’s Baxter Wilson Power Plant.

The board Thursday approved a $49,000 agreement with the engineers to provide services as part of an application for a U.S. Department of Transportation Rebuilding American Infrastructure with Sustainability and Equity, or RAISE, grant for the port.

In a related matter, the board approved an agreement with the Warren County Port Commission and Neel-Schaffer to jointly fund an environmental assessment of the proposed new port site.

If approved, the U.S. DOT grant will provide money to start construction. Mayor George Flaggs, Jr. said the grant has a $6 million match, adding, “We will pay our half.”

Dr. Jeff Holland, president of the Warren County Board of Supervisors, said the supervisors have not discussed the grant. He said Pablo Diaz, president and CEO of the Vicksburg Warren Economic Development Partnership and port director, is expected to bring the matter to the board at its Monday work session.

The city and the Warren County Port Commission will split the $800,000 cost of the environmental assessment of the property, with the city paying $475,000 and the port paying $325,000.

The city’s share is coming from $1 million in infrastructure money approved by the Legislature in a 2018 special session. The port commission’s money is from the state Department of Finance and Administration.

City and economic development officials have been discussing a new port of Vicksburg for the past three years, and invested money in marketing and feasibility studies for the project.

Economic development officials have refused to discuss the location for the port, but a diagram accompanying the city’s agreement with Neel Schaffer shows property adjacent to the Baxter Wilson power plant off U.S. 61 South, with transmission lines and markings indicating proposed locations for containment dikes on the property’s Mississippi River side.

“It’s exciting times to be even considering this; such a project for Vicksburg,” she said.

Flaggs said the board would not have entered into a contract with Neel-Schaffer if the Baxter Wilson property were not the site.

“I wouldn’t commit to anything outside the city,” he said. “It’s within the city and it’s one of the options. I’m totally committed to it. I wouldn’t have voted a contract to go one place and then do another place.”