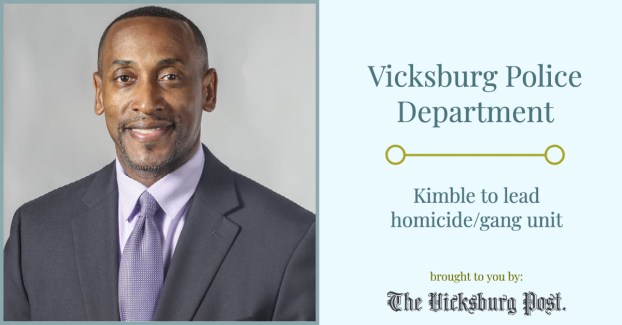 Troy Kimble accepted a position as deputy chief of a homicide/gang unit in the Vicksburg Police Department.

Troy Kimble has accepted the position of deputy police chief of homicide/gang prevention in the Vicksburg Police Department, according to information from Mayor George Flaggs, Jr.

“We had a great phone call and I look forward to making crime prevention a priority while focusing on the discharging (of) firearms and gang violence prevention within the city of Vicksburg,” Flaggs wrote in a press release announcing Kimble’s appointment.

The position, which was approved Thursday by the Board of Mayor and Aldermen, is primarily responsible for homicide investigations and gang prevention and intervention strategies and does not fall under the jurisdiction of civil service.

The deputy chief of homicide/gang prevention will also serve as the primary investigator for the homicide division of the Vicksburg Police Department and will report to the chief of police.

“I’m honored and humbled that Troy has accepted this position with the Vicksburg Police Department — I think this is the beginning of us stomping out crime in our city,” Flaggs said.

“I’m thankful for the opportunity; I’m just looking forward to being back home and working at the department that I started my career in and I’d love to assist my hometown and get things done,” Kimble said.

“There have been some things that have gone in disarray since I’ve been away from the department and I just want to assist and get those things back in order,” he said. “But I want to make an impact on trying to be proactive with the citizens and with our youth — to be interactive with them before they become offenders more than anything else — and build their trust and a rapport with the community and let them know we’re going to serve with sternness, but we’re going to serve with integrity and compassion as well.”

Kimble said, however, officers would also be tough and ensure the law is enforced.

“We’re going to do what needs to be done, but we’re also going to let the citizens know that they can rely on us and we will do the same,” he said.

He said some people may have looked at the recent mayor’s race as he and Flaggs running against each other. While he and Flaggs may have a difference of opinion on some things, Kimble said, “I don’t think we’re enemies by any means and I look forward to working with him and any chief he designates.

“I look forward to working with that person and to get their support from city hall and the chief and make sure we get things done because we owe the citizens that, and those people who have to deal with and have suffered from loss of life, I want to make sure we’re giving them the empathy and compassion they need and give them some closure and that’s what my goal is going to be.”

Kimble is a former Vicksburg police officer and served as a lieutenant in investigations. He presently serves as chief investigator for the Claiborne County Sheriff’s Department and is also the Warren County Central District constable.

It was a different time when Joseph E. Williams, Sr. returned to Vicksburg as a veteran of World War II... read more