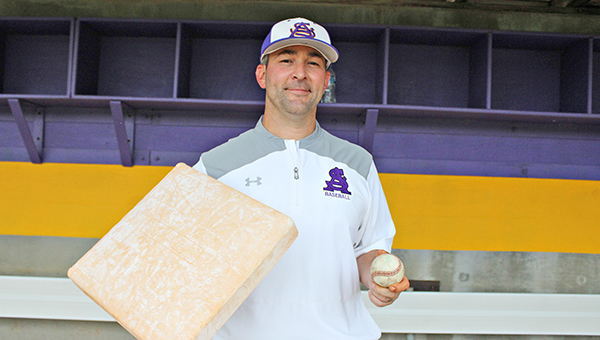 St. Aloysius' Sid Naron is the 2021 Vicksburg Post baseball Coach of the Year. Naron guided the Flashes to a 16-11 record this season, and has an 85-41 overall record in six seasons as their coach. (Ernest Bowker/The Vicksburg Post)

When Sid Naron took over as St. Aloysius’ baseball coach early in 2016, the youngest players on the roster naturally held a special place in his heart.

In the ensuing years he shaped them into contenders on the baseball field, and hopefully imparted some life lessons on it. They shared special moments and bad ones, all while chasing success.

By and large, Naron and the Flashes found it. Those young seventh-graders from 2016 graduated from St. Al in 2021 having never had a losing season. They’ve kept St. Al’s baseball program if not always on an upward trajectory, then at least not on a downward one.

“This senior group we had this year is very special,” Naron said. “They were the seventh-grade group when I got here. They’ve given so much to the program, and so much back to these younger guys. We’re on the brink of making the next step and excited about where the program is going.”

Before they do that, Naron is taking an opportunity to celebrate what has already been accomplished. He and the Flashes finished with a 16-11 record this season, and were the only team in Warren County to finish above .500. For not only that success, but the consistency throughout his tenure, Naron was selected as The Vicksburg Post’s 2021 high school baseball Coach of the Year.

“Definitely excited. It’s definitely a reflection of our team and the job that our assistant coaches Jay Harper and Judson Gatling have done behind the scenes,” said Naron, who also won The Post’s award in 2018 and has an 85-41 record at St. Al. “They’ve invested in each one of these players. I’m super excited — not for the individual accolade, but for this team. That’s what that award is, is a reflection of the team success.”

St. Al had a 7-2 record when the onset of the COVID-19 pandemic ended the 2020 season in March. COVID didn’t end the 2021 campaign, but might have contributed to it wrapping up earlier than the Flashes would have liked.

Naron contracted COVID late in the season, which forced St. Al’s players and coaches to quarantine, as well as the postponement of several district games. They then had to play nine games in a 10-day span leading into the MAIS Class 4A playoffs, and were swept in two games by Brookhaven Academy in the first round.

Naron said that disappointing finish might have laid the foundation for more success in the future, however. With so many games in a short time, some younger players who will be thrown into bigger roles next season got playing time in important games.

“We’re learning by default. We had a lot of young guys thrown into the mix because of sickness and injury at the end of the year, and they’re getting that experience,” Naron said. “There’s some big-time talent coming up in our younger classes. I think with those experiences we’ll be able to make the next step. We’re pursuing a state championship. Playoff wins, that’s really not where we’re going. We’re trying to get to a championship level.”

With their eyes on bigger prizes down the line, Naron added that he wanted to thank those that have contributed to what the Flashes have done so far on his watch — not only players, but his own family and the team’s support staff.

“God has blessed me and my family with their patience with me, being away from home for all those hours. And then on top of that, our baseball family here is super special,” Naron said. “There’s a lot that goes in behind the scenes at a private school, from the parents’ standpoint. They entrust their kids with us, but at the same time make sure everything goes as planned and let us do our jobs and they’re great supporters of what we do.”

Summer vacation for Vicksburg High’s football team was short-lived. In fact, it didn’t even include any of summer. The Gators... read more