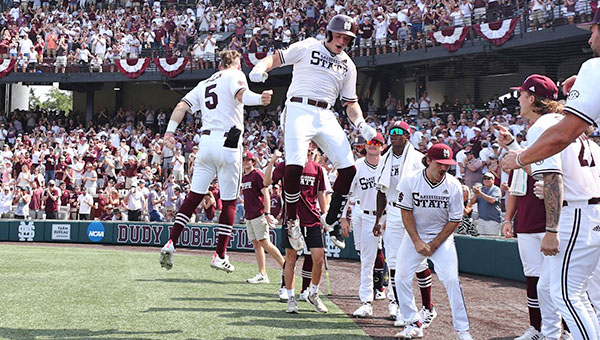 STARKVILLE — An NCAA-record crowd got a little rowdy with Rowdey, and tanned with Tanner as they cheered Mississippi State on to a crucial victory Saturday.

Rowdey Jordan went 3-for-5, including a two-run home run, and Logan Tanner hit a go-ahead solo homer in the seventh inning as Mississippi State outlasted Notre Dame 9-8 in Game 1 of their super regional series at Dudy Noble Field.

Tanner Allen also homered as Mississippi State rallied from a 7-3 deficit to win.

“That was a nerve-wracking game, when we fell behind 7-3,” Mississippi State coach Chris Lemonis said. “Those guys played as good as they can play. They put the team on their back. We had some other guys (step up) with Brad Cumbest, Kamren James and Logan Tanner’s big swing.”

The Bulldogs (44-15) remained undefeated this postseason, and can clinch their third consecutive College World Series berth by beating the Irish (33-12) again Sunday at 5 p.m. The game will be televised on ESPNU.

Another sellout crowd is expected after 14,385 fans attended Saturday’s series opener. It was the largest on-campus postseason crowd in NCAA history and ranks fifth all-time in MSU’s record book.

Jordan credited the crowd with helping the Bulldogs pull out a crucial win in Game 1.

“As soon as you get a little momentum, they get loud. The confidence just starts rolling, and that’s what leads to big innings and that’s what happened today,” said Jordan, who scored three runs and drove in two. “(We) got a few hits, crowd gets loud. Then we get a big hit, and they get even louder, and it just snowballs.”

Even though Mississippi State came out on top, neither team ever fully wrestled away control of the back-and-forth game.

Notre Dame scored in each of the first five innings to build a 7-3 lead, but Mississippi State got three runs in the fifth and then took the lead on Jordan’s two-run home run in the seventh.

“We knew it was 7-3. In the dugout, we knew the game wasn’t over,” Jordan said. “We knew we had a chance to put up some runs. The mindset was ‘Let’s put some runs on the board. Let’s keep fighting and have good at-bats,’ and that’s what we did.”

After an RBI double by Zack Prajzner tied it in the eighth, Tanner homered in the seventh to give the Bulldogs a 9-8 lead.

Tanner’s home run was his only hit in four at-bats. He had earlier hit into two double plays.

“I’m sure he was a little frustrated, grounding into two double plays in a game like that,” Jordan said. “But the good thing with Lo Tan is he puts the at-bats behind him. It’s always the next one. He had a big home run late in the game, and it was good.”

MSU closer Landon Sims retired all six batters he faced to earn his 10th save of the season. He was the only one among six pitchers used by both teams that did not allow a run.

Sims had three strikeouts, and retired the middle of the Irish order in the eighth.

“With the No. 2 and 3 hole to start, I knew I had to get those guys out. Those were really big outs to have the bases empty when (cleanup hitter Niko) Kavadas came up,” Sims said. “We did plenty of scouting on him and know how good of a player he is. We don’t want to throw him any mistakes this weekend, because he will capitalize on them. That battle with him was what it’s all about. That was really fun.”

Tanner Kohlhepp (7-2) took the loss for Notre Dame after giving up four runs in four innings. The Irish also committed four errors that led to a pair of unearned runs.

Jordan credited the crowd for creating some of Notre Dame’s errors. The Irish only had 26 errors in their first 46 games.