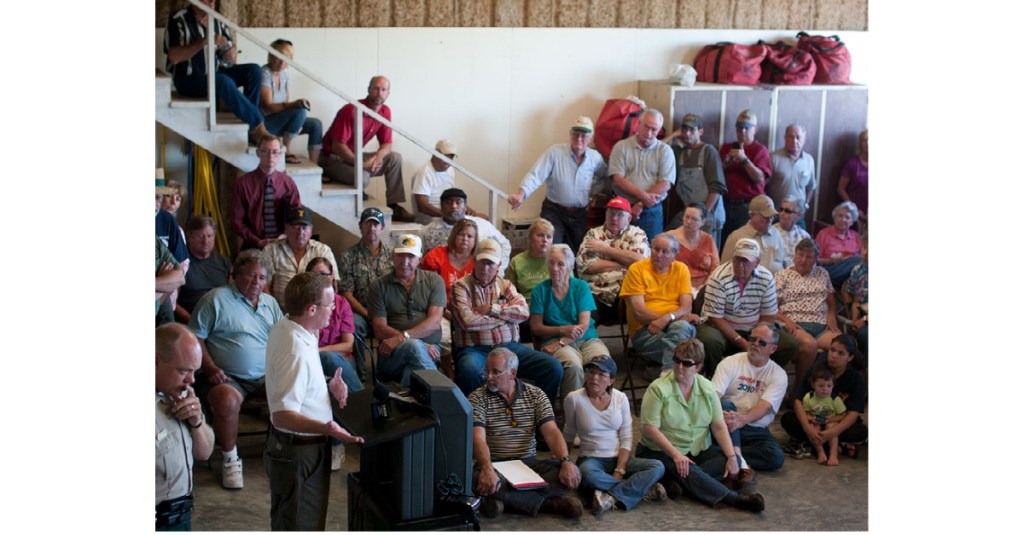 Hundreds of people gather at the Eagle Lake Volunteer Fire Department Friday morning to hear Sheriff Martin Pace, left, and representatives of the Corps of Engineers talk about the impact of the rising waters on the Eagle Lake Community. (Photo by David Jackson)

A flood was imminent at Eagle Lake on April 30, 2011, and Warren County Sheriff Martin Pace was charged with delivering the news to residents of the hamlet, located off U.S. 61 North.

It was described as a “flood situation,” with the potential for Eagle Lake to rise to 90 feet — significantly higher than its normal level of 76.9 feet. Pace, along with officials from other state and local agencies, made the difficult call to evacuate everyone they could from the area.

“After consultation with Corps of Engineers officials, Mississippi Levee Board officials and others, it became obvious that the evacuation of Eagle Lake was necessary,” Pace said. “It was a tough decision that certainly not everyone agreed with, but given the circumstances and the information available at that time, I would make that decision again.”

Pace and his deputies helped in the evacuation of people and more than a few animals — including a herd of goats. The name of the game, he said, was saving as many living things as possible from the rising waters.

The decision to evacuate Eagle Lake and the surrounding area was made when officials raised concerns about the structural integrity of the Buck Chute Bayou levee. Water was rising at a rapid pace anyway, but if the levee failed, more people would be in danger than first responders could safely evacuate.

“During that period in time, there was a section of the mainline levee that was a concern,” Pace said. “If that portion of the levee had breached, all of Eagle Lake and the surrounding area would have been flooded within hours with no way to evacuate the entire population in that length of time.”

The 2011 Mississippi River Flood was one of the “most challenging natural disasters” Pace said he’s faced in more than 30 years as a law enforcement officer.

However, he said, the survivors of the flood are the true heroes.

“The real heroes of this flood are the citizens that lived through it. People who live along the river and in its path are very resilient and they will overcome,” Pace said. “That’s who needs to be applauded in any flood: the citizens whose property and livelihoods are affected.

“The citizens of Warren County and the surrounding areas did amazingly well in the 2011 flood, as they did in the 2019 flood and many others before and since.”